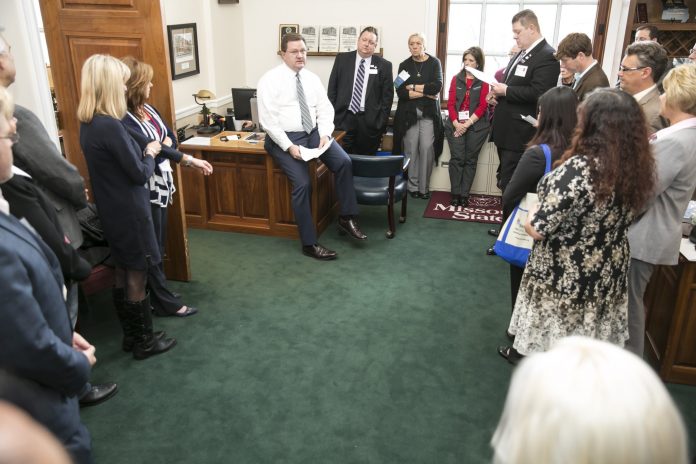 JEFFERSON CITY, Mo. – The Missouri REALTORS have descended upon the Capital City for their annual conference, but this year marks a special occasion for the group: a 50-year-anniversary for the Fair Housing Act, as well as Sam Licklider’s 50th year lobbying for the organization.

The event, in conjunction with the organization’s January business conference, drew over 400 attendees, more than 100 of which were attending for the first time.

The first of these, the tax credits, have been a topic of much contention in the past few months as Republicans push forward with tax reform measures. Gov. Eric Greitens made headlines in 2017 when he led the vote to pull the funding for the low-income housing tax credits for the following year.

“The Missouri REALTORS has been a champion of Missouri’s historic tax credit since its inception,” Johnson said. “In fact, we were one of the organizations that helped get that initiative passed. It’s been a great resource for our state to revitalize communities, both rural and urban. We wouldn’t have some of the buildings that we do now if not for those tax credits.”

“The low-income housing tax credit is critical to our state,” he added. “It provides housing and opportunity to people who might otherwise have any options. It’s just necessary, and it’s the right thing for us to be doing as a state. Some of the developers just wouldn’t do these projects without these tax credits.”

“Far too often, at both the state and national level, legislators look at these things in a vacuum, and they don’t see this ripple effect because they’re not looking at the big picture,” CEO John Sebree said.

As for the Fair Housing Act, it has now been 50 years since it was put in place. For the REALTORS, it’s a monumental anniversary.

“Missouri REALTORS is very proud of the work that we have done to further fair housing in our state,” Johnson said. “We certainly have more work to be done, however, we’ve come a long way over the past 50 years. And we’re very passionate about protecting and preserving private property rights and providing a way for home ownership to be within the reach of the masses. Without the Fair Housing Act, home ownership is something that has been denied to people where it shouldn’t have been, quite frankly.

Johnson says they have some items to commemorate the Fair Housing Act this year, and will continue to support and promote it across the state.

“Real estate touches everything,” Sebree said. “There are hundreds of issues that we care about.”

On the issue of real estate licensee immunity from liability, Sebree says that there have been issues with frivolous lawsuits against realtors because the square footage of a house was off due to a third party source’s information.

“There is an onus on our members to make sure they’re doing the right thing, but it really addresses some frivolous lawsuits,” Sebree said.

“It’s not fair that the realtor would be held responsible when they were using information provided to them by county or city tax records,” Johnson said.

“It’s much more affordable to own than it is to rent, but getting over that hurdle of the down payment is hard,” he said. “So we’re excited about that. Rep. Becky Ruth has that in the House and Sen. Caleb Rowden in the Senate.”

Both men said the event is a great opportunity for their members to connect with the Capitol, saying that they’re the largest trade association in the state, in every community. Sebree said that it was worth noting that 10 legislators in Missouri are realtors.

Realtors connect the community to Jefferson City, because they’re ones out there, hearing from people in the community. They know what people are struggling with, so it’s nice to see realtors running for public office,” Sebree said.

“And no one does yard signs better than realtors,” he added with a laugh.