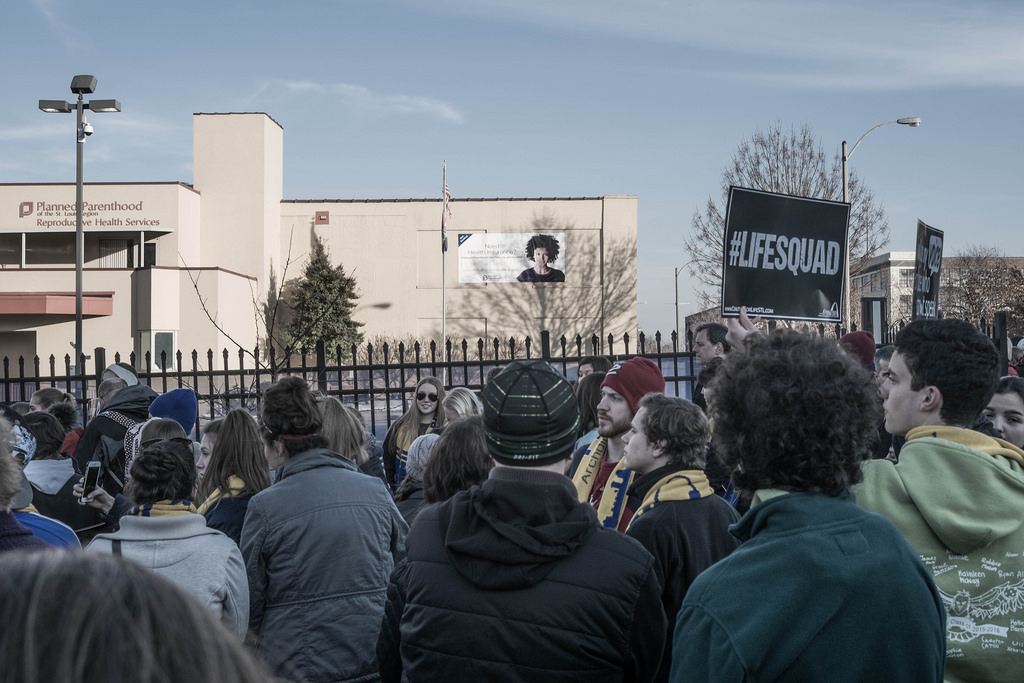 For the second week in a row, the bill that would create a buffer zone between protesters and healthcare facilities, including Planned Parenthood, could get a vote for final passage by the St. Louis Board of Aldermen Friday.

With the legislative session quickly coming to a close, the bill would need to get final passage in the next two weeks before the board goes on spring break, otherwise it would likely die.

Following next week’s meeting, the board will not meet again until April 14.

Although the board perfected Board Bill 34 by a slim vote of 15-13 two weeks ago, some yes votes, including Alderman Shane Cohn, 25th Ward, and Alderman Samuel Moore, 4th Ward, were absent last Friday, prompting bill sponsor Alderwoman Christine Ingrassia, 6th Ward, to move the buffer zone bill back to the informal calendar.

Supporters of the bill appeared to have the votes at the Feb. 23 meeting, but with such a narrow margin it was clear they needed all present in order to ensure they get the necessary 15 votes for final passage.

Ingrassia said last week she’s still confident it will pass, but others say support for the measure may be waning.

If passed, the new law would increase safety around health facilities by creating an eight-foot buffer zone between protesters and the facilities.

The bill states that no one “shall knowingly enter, remain on, or create any obstruction within the driveway of a health care facility or within a public way or sidewalk within 8 feet of any portion of such facility’s driveway during the facility’s posted business hours.”

While the bill only refers to healthcare facilities, its introduction stems from a series of calls to law enforcement at the only Planned Parenthood clinic in St. Louis. Calls of impeding traffic, which is stopped by protesters at the clinic on Forest Park Parkway, as well as peace disturbances, rose from 38 in 2015 to 73 in 2017, according to Ingrassia.

Since its introduction, however, some critics have claimed it infringes upon First Amendment rights. At least 13 Aldermen, including Alderwoman Carol Howard, 14th Ward, who called the bill “a slippery slope”, said the approval will only warrant more buffer zones at other places in the near future.

Alderwoman Sharon Tyus, 1st Ward, said she supports a woman’s right to have a choice but fears greater implications on protesters with the passage of the bill.

She also urged the Planned Parenthood clinic to put up a sign telling patients where to go, so that they may avoid protesters altogether.

Others voiced support for the measure, including Alderwoman Cara Spencer, 20th Ward, who noted that Planned Parenthood provides more services beyond just abortion, such as well woman exams and STD testing.

Ingrassia says her legal team has assured her the bill could withstand a court challenge, because it “strikes a balance between free speech and safety.”

Similar laws have been passed in New York and Chicago. Supporters argue they offer a clearer avenue to charge those who impede the flow of traffic in and out of healthcare facilities such as Planned Parenthood.

If the bill gets final passage, violating the ordinance, or blocking entry or exit from a facility such as the Planned Parenthood clinic in St. Louis, would be punishable by up to $500 in fines or up to 90 days in jail.

Aldermanic President Lewis Reed and the full Board of Aldermen will also take time to recognize the critical work of 28 local organizations dedicated to reducing crime, especially crime caused by youth in the City of St. Louis at their weekly meeting Friday.

These not-for-profit organizations serve at-risk youth in the 11 to 24 year old age demographic.

Proposition S, approved by St. Louis voters in 2008 for public safety, allocates $1 million each year to be set aside for anti-violence youth programs. Organizations apply for the funds through an RFP process and the awardees are selected based upon need.

3,988 thoughts on “Buffer zone bill could get a vote on final passage at Board of Aldermen meeting”