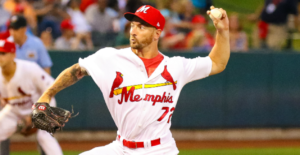 Sherriff, 27, the Cardinals 28th round pick out of West Los Angeles College in the 2011 draft, has appeared in a team-leading 48 games this season for the Redbirds, ranking T-4th in the Pacific Coast League. He’s 5-1 with a 3.19 ERA and has six saves in seven opportunities, covering 53.2 innings.

The southpaw has stranded 14-of-17 inherited runners this season and is holding left-handed batters to a .198 batting average while right-handers are hitting .215 with no home runs. Of his 48 appearances this season, 37 have been scoreless and he has not allowed a home run since June 9, a span of 24 games. Sherriff received an invitation to Major League Spring Training in 2017 and made eight relief appearances allowing one run in 8.2 innings. Sherriff will wear uniform No. 65.
Lucas was purchased on August 19 and made his Major League debut that night at Pittsburgh. He made two appearances for the Cardinals, and pitched a combined 4.0 innings, striking out five.
Rosenthal was placed on the 10-day disabled list on August 17 with right posterior elbow irritation. Rosenthal, who has 11 saves for St. Louis this year and is 3-4 with a 3.40 ERA, ranks 5th among National League relievers with 76 strikeouts.

4,146 thoughts on “Cards pick up Sherriff from Memphis to bolster bullpen, Rosenthal on disabled list, Lucas goes to minors”