The Clayton Board of Aldermen tonight will get an update on the DeMun Park Master Plan, which is slated to cost more than a half million dollars. 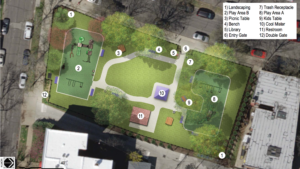 City staff has worked with Planning Design Studio to develop the project plan, which was approved by the Parks & Recreation Commission on Aug. 7. In addition to playground structures, the plan includes a unisex bathroom, a cool water mister, and ensures all trees remain unharmed and in place.

Aldermen also plan to take up and approve an ordinance that allows the Centene development project to move forward at Forsyth Boulevard, South Lyle Avenue, and Carondelet Plaza.

The board will also take up the 2018 city budget for first reading, which is $29.2 million. That’s up about $1.2 million, according to City Manager Craig Owens. The budget’s final approval is slated for mid September and goes into effect Oct. 1 for the fiscal year.

As part of the budget adoption process, Owens will present to the board the proposed tax rates. (The Board extensively reviewed the proposed budget at work sessions held July 18 and Aug. 18.)