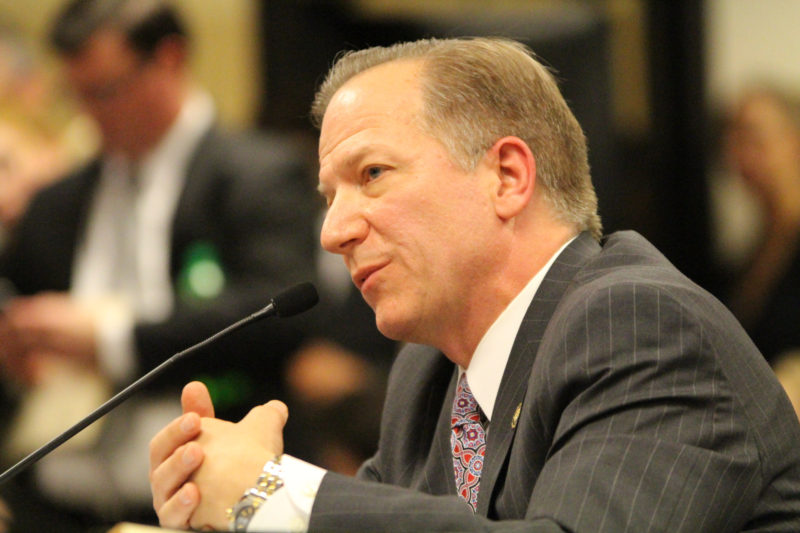 JEFFERSON CITY, Mo. — The issue of paycheck protection and collective bargaining is once again making its way before the Missouri State Legislature.

The Senate Committee on General Laws on Wednesday heard testimony on SB 602, a bill sponsored by Sen. Bob Onder which seeks to modify and expand the state’s Public Sector Labor Law.

And, as many of the legislators will tell you, it’s nothing they haven’t heard before.

Wednesday’s hearing lasted roughly an hour and a half, with a number of people testifying for or against the bill, weighing the language and how it would affect Missourians.

The bill would implement a number of provisions, most notably the paycheck protection measure that was so well-outlined during last year’s legislative session. Simply put, the bill would require an employee to give annual consent for a “public body” to withhold fees from their paycheck for union dues, agency shop fees, etc. Currently, twelve states have similar laws.

“This bill would create a number of protections for government workers in Missouri,” Onder said. “Much of the discussion on labor reform in the past several years has had to do with private sector labor reform, but for many reasons, government labor union reform is just as important.”

She told the committee her story, sharing her experiences to highlight how the unions had failed her and the teachers.

“I was bullied by union leaders for daring to ask for accountability,” she said. “My teacher friends and I were shut down by state and national leaders when asking to see how our dues were used.”

A number of organizations rose to speak in support of the bill, including Americans For Prosperity and Missouri Rising.

“Paycheck protection legislation protects Missouri workers from union overreach by requiring unions to annually obtain consent from members and nonmembers for paycheck withholdings,” Mark Rhoads said, testifying on behalf of Missouri Rising. “SB 602 protects union members and nonmembers that reject union withholdings from an increase in dues or from paying dues as a condition of employment. It is reasonable to permit public workers the right to consent to such withholdings and to have some input into how their hard-earned wages are spent to support or not support political campaigns through union dues.”

Opponents of the bill called it simply another attack on workers and organized labor. They contend that it undermines the relationship between the union leaders and their members.

Sen. John Rizzo questioned the fact that so many 501c4’s were speaking in support of a bill looking to provide more transparency when they do not reveal the information on their own backers.

He noted that these organizations could come forward and make it seem like there was large support for a measure or movement, but said it seemed unfair when the people of his district “only had him” to represent them.

No action was taken in the hearing, leaving the executive session to take place at another time.

3,884 thoughts on “Collective bargaining and paycheck protection get a hearing in Senate’s Committee on General Laws”