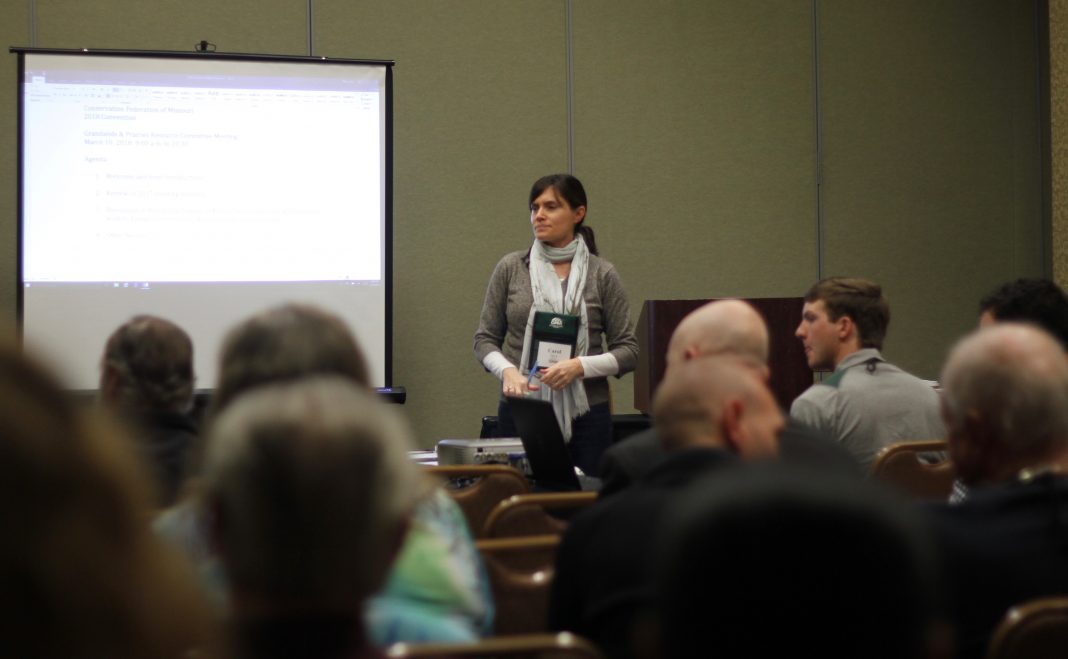 The Conservation Federation of Missouri’s committee on grasslands and prairies goes through a resolution at their annual convention (ALISHA SHURR/THE MISSOURI TIMES).

JEFFERSON CITY, Mo. — Over the weekend, the Conservation Federation of Missouri held their annual convention in the Show-Me State’s Capital where they adopted eight resolutions, presented awards and heard from several speakers.

“It is a coming together of a diverse group of conservationist from all across Missouri to really work on 10 different, distinct subsets of conversation,” said Brandon Butler, executive director of CFM. “We take all those individual groups and bring them together for this convention so we can work collectively for the betterment of Missouri as a whole.”

Of the nine pre-filed resolutions — that are talked through in committees before moving to a full member vote — only a recommendation for the Department of Conversation to implement a requirement for barbless hooks in trout streams did not pass. The resolution that started in the Rivers, Streams, and Fisheries committee simply did not enough science to support if such a policy would have sufficient impact on fish mortality.

Other resolutions passed includes urging the Missouri General Assembly to increase wildlife violation fines, strengthening the Department of Natural Resources to include the language “and to preserve our unique natural and historic places, while providing recreational and educational opportunities for all citizens,” and to create a public awareness campaign to discourage the release of balloons for the protection of wildlife and the environment.

The CFM also voted to support the installation of the eastern segment of the Rock Island Trail and the creation of four new state parks.

The Rock Island Trail is currently being evaluated by the Department of Natural Resources as to cost development and community stance.

“We have tremendous challenges in deferred maintenance and existing need in the state park system and the development of the rock island trail would not be an inexpensive endeavor,” DNR Deputy Director Dru Buntin said. “We estimate it would be anywhere from $60 million to $80 million. But we don’t really know so we want to spend the next year trying to get a better understand of what that development would cost, as well as discussion with communities and private sector on how we might undertake the development of that.”

“I love the parks, even with Dru saying some of the legislators are maybe fighting back, the citizens have spoken due to a public comment period,” said Butler. “Hopefully the citizen voice will get through to the legislators and they will understand that we expect these state parks to be open at some point in the future.”

During the convention, CFM also honored Missouri citizens and lawmakers with various awards. Rep. Tommie Pierson, Jr. and Sen. Mike Kehoe were both recognized as a Conservation Legislator of the Year.

During her speech to on Saturday morning, the director of MDC stressed the importance of the organization fighting for Missouri’s natural resources.