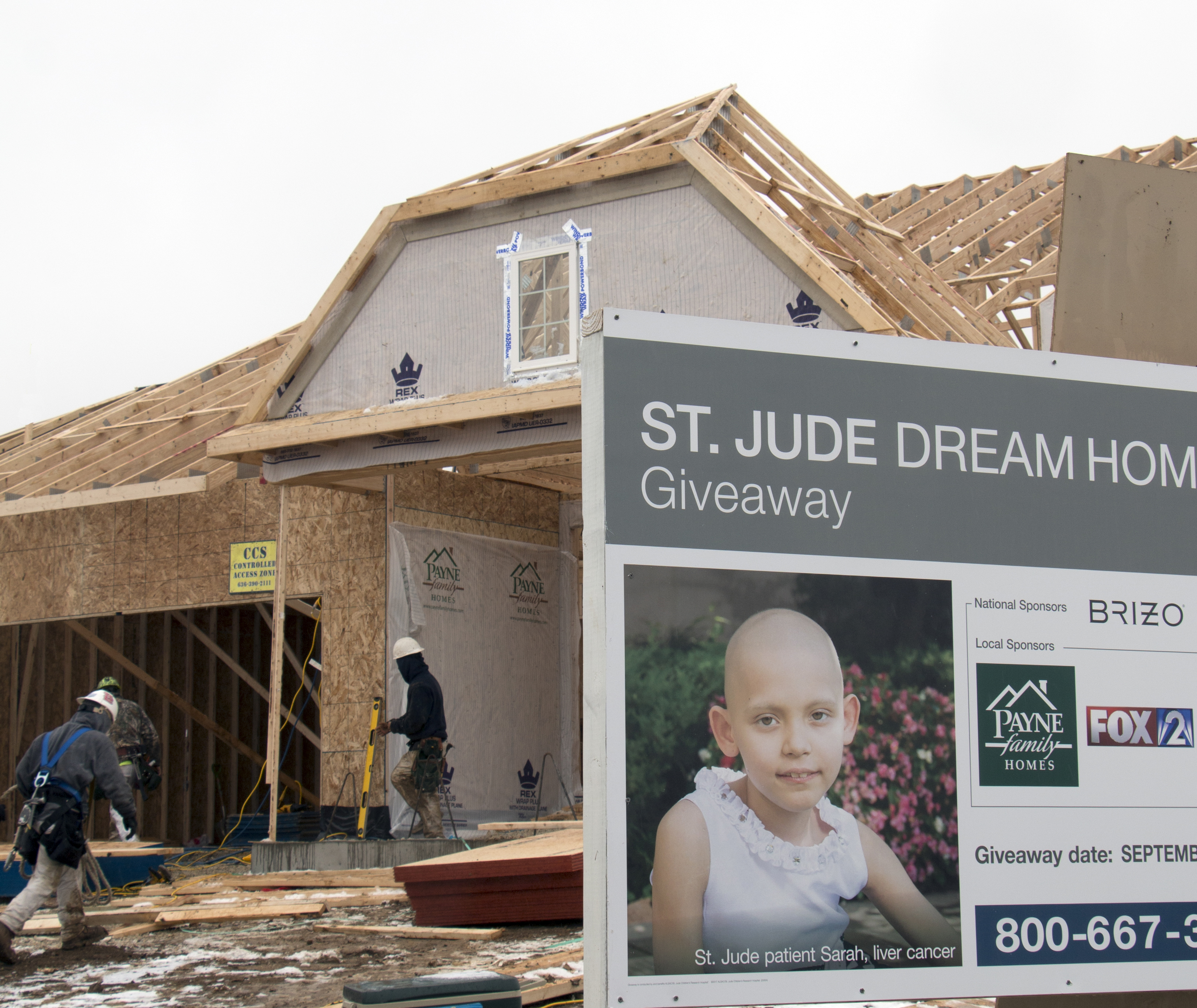 A new home being constructed in the O’Fallon neighborhood of Legends Pointe will stand out from all the rest this year.

The 2018 St. Jude Dream home, which will benefit the Memphis children’s research hospital, will donate the house to one lucky family while benefiting children with life-threatening illnesses.

The house had it’s framing constructed in O’Fallon on Saturday by volunteers from the St. Louis-Kansas City Carpenters Regional Council.

Paul Higgins, a representative from the Carpenters, said even though the cold and snowy sky wasn’t an ideal building environment, the pay off is well worth it.

“It’s not ideal weather for construction but we’re tough, we’re used to it and we never miss the chance to pitch in on one of these St. Jude homes,” Higgins said.

The dream home is being built by St. Louis-based Payne Family Homes, with donated materials and labor. With a value estimated around $400,000, the 3,700 square-foot house features four bedrooms, a finished lower level and a second floor eagle’s nest.

More than 30 cities participate in the Dream Home giveaway, which sells $100 tickets for the chance to win the house or other prizes. It is St. Jude’s largest and most recognized annual fundraiser.

Founded by actor Danny Thomas in 1962, the Memphis hospital treats 7,500 children each year, most suffering from cancer. Families never receive a bill from St. Jude for treatment, travel, housing or food.

For the past 30 years, St. Jude Children’s Research Hospital has raised $370 million for medical care and research and give away more than 450 of these dream homes.

Eva Fryar, vice president of construction operations at Payne Family Homes, said 2018 marked the fifth year the construction company has teamed up with the organization.

“It’s an amazing cause and we always say that if you’re able to do something then you should do something,” Fryar said. “It’s given away in September and we start planning for the next house in November. We have just two months off before we start planning, breaking ground and doing it all over again.”

According to a press release, this year’s build is happening under a cloud of uncertainty for the Carpenters and its signatory contractors. Gov. Eric Greitens and Republican-controlled legislature are pushing a right to work law – a potential blow to the state’s construction unions.

“In other parts of the country that are right to work they don’t get the whole Dream Home built for free because they can’t get a group like this together,” Vic Hoerstkamp, president of Cheltenham Construction Services said. “Our union carpenters out here today are part of a team, they make a good living and so they don’t mind volunteering their time like this.”

Tickets for last year’s giveaway, which was also built in St. Charles County, sold out and raised more than $1 million. Contestants can start entering this year’s drawing from the dream home beginning in June at www.stjude.org.