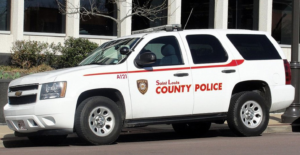 Upon arrival, officers located an accident involving two passenger vehicles. The striking vehicle was traveling southbound on New Halls Ferry when it struck a vehicle attempting to make a left turn onto Sugar Pine Drive from northbound New Halls Ferry.

The driver of the striking vehicle, a 19-year-old male, suffered minor injuries and was taken into custody at the scene of the investigation.

The accident is under investigation by the St. Louis County Police Department Bureau of Crimes Against Persons.

According to police, the striking vehicle was identified as a suspicious vehicle about a mile from the scene of the fatality accident in the City of Florissant.

The St. Louis County Police Department is asking anyone who witnessed this accident to contact them.