ST. CHARLES, Mo. — St. Charles County Executive Steve Ehlmann will be seeking re-election. In a press release, Ehlmann says he intends to run for another term, pledging to encourage economic growth in one of the fastest growing counties in the Show-Me State. 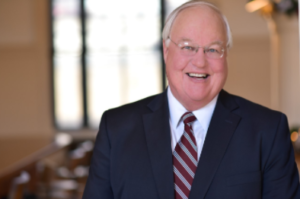 “I will be asking the voters for the privilege of serving them an additional four years,” Ehlmann said. “If elected, I look forward to working with our local, state, and federal officials to continue the progress we’ve made and ensure that St. Charles County remains safe, accessible, and business friendly—a great place to raise a family and start a business.”

In the past ten years, St. Charles County has seen increased economic opportunities and a growing need for transportation due to the ever-growing nature of a thriving industry. The county’s unemployment rate is the lowest in the region—and far below the national unemployment rate.

Ehlmann has served since 2007 when he was elected as the second-ever St. Charles County Executive. In his career, Ehlmann has served in all three branches of government, as a member of the Missouri House of Representatives from 1989 to 1993 and the Missouri Senate from 1993 to 2001. He also served in the judiciary as Associate Circuit Judge from 2001 to 2003 and as Circuit Judge during 2003 for the 11th Judicial Circuit.

Serving as County Executive, Ehlmann has put a premium on maintaining public safety, working to secure the county’s fair share of funding for transportation and infrastructure projects, as well as the continued growth of the local park system.

Ehlmann has focused on maintaining public safety, securing the county’s fair share of state funding for transportation and infrastructure projects, and growing the local park system.

He praised the St. Charles County Police Department, which was created by voters just three years ago, for their efforts in maintaining the county’s low crime rates in a time when violent crime has been prevalent in the media in other parts of the region.

While the aging transportation networks have been an issue for other places in the region, St. Charles County has been able to excel, providing MoDOT with funds to be used for the new Daniel Boone Bridge. Under Ehlmann’s time as County Executive, he helped put together a partnership between the county, its municipalities, and MoDOT that led to the completion of the Page Avenue Extension three years ago. That partnership has continued, helping to build a new Fifth Street interchange at I-70 in St. Charles and procure funding for a new interchange at Highway P and Peine Road, as well as many additional County Road Board projects.

Growing local parks has also been a focus under Ehlmann’s tenure, as the county has opened one park in Brommelsiek, acquired another in Lindenwood, while also starting construction on another across from the Kisker Road Library, and purchasing land for yet another. Ehlmann pointed out that the county had achieved the goal he set when first elected to have as much park land per resident as St. Louis County.

“I’m proud to have served St. Charles County during a time of incredible growth and opportunity for those who live and work here,” said Ehlmann. “I can look out of my office and see St. Louis County across the river, and it is a constant reminder that we must be careful to avoid their failures.”