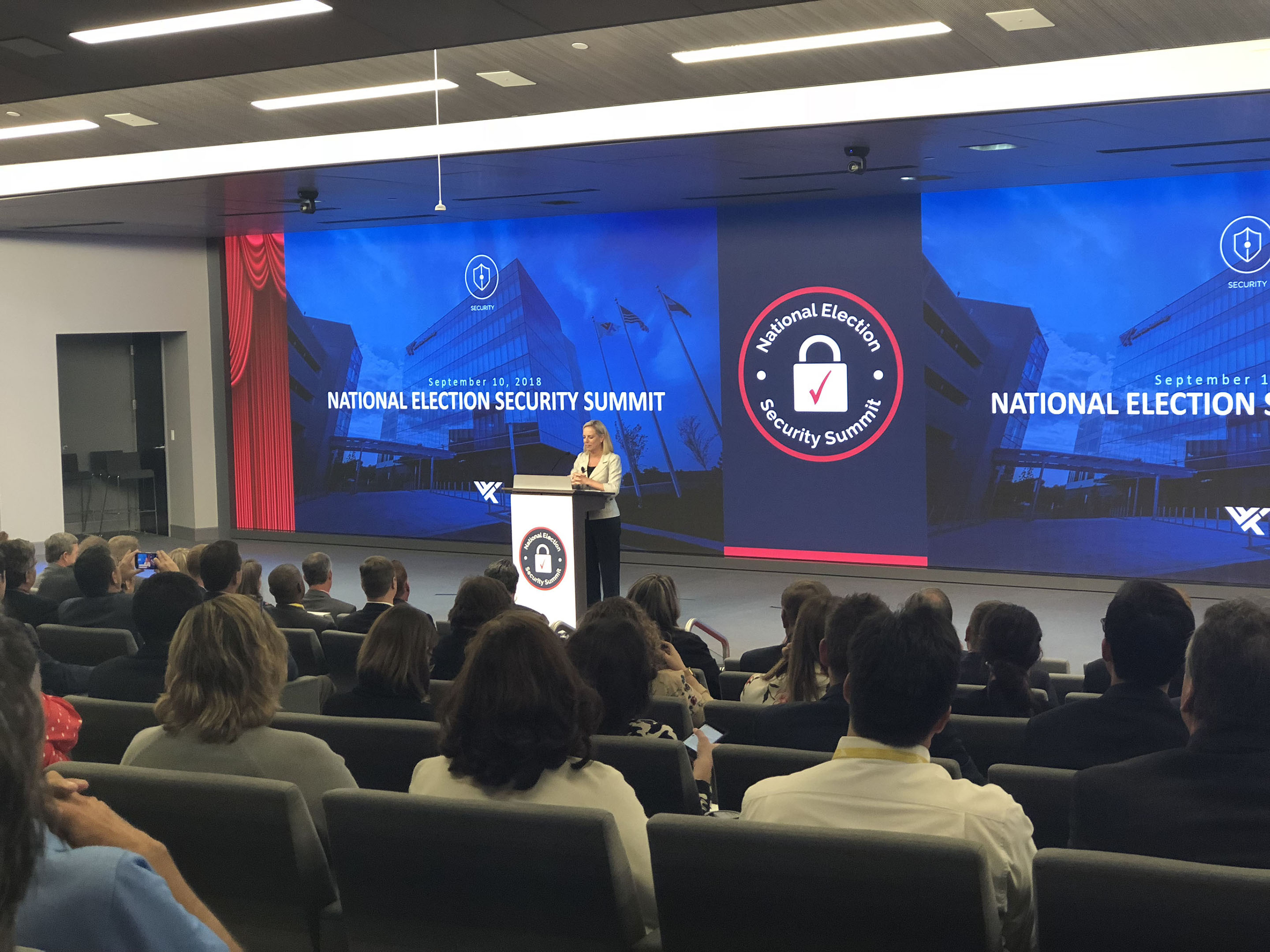 ST. LOUIS – During the National Election Security Summit held at the World Wide Technology World Headquarters, Department of Homeland Security Secretary Kirstjen Nielsen addressed the audience on how they, as elected officials, can work with Homeland Security to better prevent getting attacked at all levels of the nation.

Nielsen noted that tomorrow will be the anniversary of our country’s history, one of our “darkest hours” as a country.

“In the days following our attack,” said Nielson. “Our fear and incredulity was replaced by defiance and determination. And that’s what makes our country so wonderful and what makes me so proud to be part of this government and this country.”

Nielsen said that there was a new commitment to protect our country and a new way of looking at national security. After the attack of 9/11, President Bush established a precursor to the department, the Office of Homeland Security, that was focused solely on terrorism prevention during that time.

The Terrorism Prevention Office grew into a department and today that department is “charged with protecting Americans from threats as diverse as nations state’s attacking our critical infrastructure to transnational criminal organizations trafficking people and weapons to what is seen on the high seas with the coast guards, and the rise of the lone terrorist who is inspired to grab whatever weapon he/she can to commit violent acts and chaos in our communities,” said Nielsen.

Nielsen said that she has thought about the attack on 9/11 a lot. Thinking about how far the nation has come since then and where the nation needs to go next, and what they as a department and country need to do next.

“We continue to keep our eyes on the horizon,” said Nielsen. “And on the threats that will come the next day and the day after.”

Nielsen said that the election security has emerged within the last couple years as the principal national security threats facing our nation. She acknowledged that this shift has been the jobs of the election officials to be very difficult.

“I’m glad to be here today,” said Nielsen. “To give you my commitment that my department will continue to stand ready to assist you in protecting our critical infrastructure systems.”

Nielsen highlighted some of the services that the Department of Homeland Security offers to the federal, state and local election officials: no cost technical assistance, risk and vulnerability assessment and ensure voter registration databases are securely configured.

Nielsen said that this became an issue when the Russian Government made an attempt to interfere with the elections in 2016.
“American people demanded answers,” said Nielson. “They demanded action. And they wanted to know what happened and what can we do to prevent it in the future.”

Nielsen said that there is no evidence that election results were altered in any way. They did see, however, that Russian Government cyber hackers were seeking vulnerabilities and access to the U.S. election infrastructure. This was concerning for Nielsen and her department. She said that any attempt to interfere whether it was successful or unsuccessful, it was a direct attack on our democracy.

“It’s unacceptable,” said Nielsen. “And that is why we are here today and why our partnership is so important.”

Nielsen said that a lot of lessons were learned in 2016 and she was happy to report that the together they are miles from where they were then. She said that the progress they have made is real and the nation’s elections are more resilient today and that is because of the work that the election officials are doing and the work that DHS is doing in support of them. She said that while there is not a threat that matches that of 2016, there is still a threat that is present and evolving and they must remain committed to securing our democracy.

In 2017, the DHS was able to prioritize the support that they give to the election officials within the critical infrastructure realm.

“Just as there is no correct way to run an election,” said Nielsen. “There is no one size fits all when it comes to election security. Each state and even county must develop a tailored approach based on what works best for your systems and your voters.”

Nielsen said that election officials are the one in charge in the partnership because they know what is best for their communities and what the people in their communities need. They know the budgets and are aware of the possible day-to-day threats that could occur.

Nielsen acknowledged that protecting elections from the Russian Government was never part of anyone’s plans. However, it is a challenge that everyone shares together.

Nielsen said she hopes to partner with the Secretaries of State and election officials because the partnership is the only way to ensure that the fight is not an individual state fight, but a nation fight and that it is won.