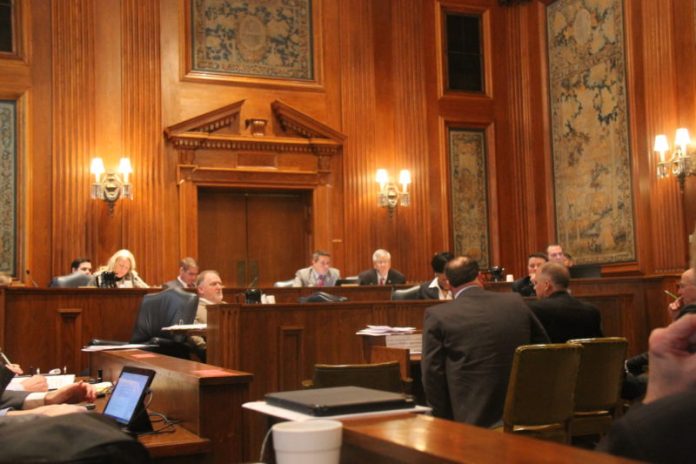 JEFFERSON CITY, Mo. – Legislation regarding utilities is moving forward, with the latest news Wednesday afternoon that Sen. Ed Emery’s SB 564 had passed out of its first Senate committee.

Just last week, the committee heard hours of testimony on whether the bill should advance, debating the merits of what Emery called a more simplified version of the previous year’s utility bill, SB 190.

The bill seeks to push utility companies forward in an endeavor to upgrade their power grids by modifying provisions for rate adjustments and implementing rate caps.

It seems that the members of the Commerce, Consumer Protection, Energy and the Environment committee agreed with the testimony in favor of the bill, waiting one week to vote the bill “do pass” with a 9-1 vote.

“The committee members all agree that something needs to be done, but they all acknowledge, by and large, that we still have some work to do on the bill,” Emery said.

Emery said he spoke to the members of the committee beforehand, saying that the intent was to continue working on the bill to address the concerns laid out in the previous hearing.

Sen. Dave Schatz spoke in the hearing, saying that the vote was not an approval of the bill as the final product, but echoing the sentiments that the bill was significant enough to move it forward.

“A number of committee members have concerns, and we’re going to address that, but whether they address it sufficiently to satisfy everyone is obviously always a question through the legislative process,” Emery said. “We’ll have floor substitute that we will introduce when the bill actually comes up on the calendar and that floor substitute is what we will work on and debate in the Senate.”

He says that any constructive amendments would be welcomed.

Only Sen. Gary Romine voted against the bill, holding true to his convictions as he has every time a similar bill has appeared before the committee.

“My number one concern with the bill is that it’s not a cap at all, and they’re trying to garner support from all people involved – other senators as well as public opinion,” Romine said later that afternoon. “It’s a milestone. Once they average three percent, the next five years, everything that was not used in the rate case gets carried forward into the next rate case, which could mean a 10 percent per year increase going forward. It’s not anything but a delay tactic.”

Romine says that the bill is “fraught with problems” and needs more work to it, perhaps even completely different language. He says he is in the process of trying to draft some legislation using his key points of issue with the bill.

“I would like to deal with this issue, but we’re always presented with such a ridiculous proposal that there’s no fixing the bill,” he said. “Maybe I need to draft my own language to address it.”

Romine’s inquiries during the hearing sought to point out that the caps, which had been called for by a number of organizations during the interim, were not truly hard caps. As for the changing of the ratemaking mechanisms, Romine says it’s made difficult because the current system seems to be working well for utility companies in the Show-Me State.

Romine also stated that with the caps, they feel more comfortable adding other provisions, or additional charges, as he calls the items.

“It’s nothing but a win-win for the utility companies, and all the consumer gets is five years worth of caps,” he said. “But they’re going to see a big spike the following year, possibly.”

That sentiment is shared by fellow Sen. Doug Libla, who, prior to the hearing on Wednesday, issued his analysis of the bill and stated why he opposed the bill.

“I don’t disagree that this bill is not in its final form,” Emery said.

As to the issue of the rate caps, Emery said it’s one of the key issues they will have to address, trying to find a way to “harden” the rate caps in a manner that is more agreeable.

He said has meetings scheduled in the coming weeks to try and find the ways to address the concerns, especially since the bill seems to be coming out so early in the legislative session.

We’re at least in a workable position, and I think we have a lot of support in the Senate to get something done in this regulatory environment,” he said. “I think we’re in a good spot this year.”