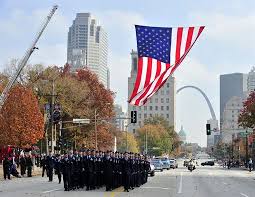 KIRKWOOD, Mo. — A group of veterans, family members, employees and concerned citizens met Monday night to address what they say is abuse, mistreatment and neglect of veterans at the St. Louis Veterans Home in north St. Louis County.

The group, which held a press conference at North Kirkwood Middle School, allege that under the inefficient leadership of Rolando Carter, the home administrator, conditions continue to get worse.

Dory Poholsky, a friend of many of the veterans, said getting to the bottom of the situation has become important to her.

“Not only the mental but the physical effect this is having on them has gotten out of control and it’s now extended to their wives,” Poholsky said. “The worry and the strain that they suffer knowing that their husbands are there, I just knew I couldn’t take it anymore, listening to it and not being able to do anything about it.

“We’ve got to be their voice”

Former state representative and veteran himself Rick Stream, who has been a strong advocate for the veterans, said there is a multitude of evidence of neglect resulting from numerous hours of interviews with veterans in the home.

Stream said those interviews revealed there have been a significant number of falls due to lack of properly trained staff, and instances of burns and scalding due to negligence. He added that bedsores are commonplace due to lack of proper care, veterans are not bathed properly and records are falsified.

Stream also alleges occurrences of prescription medication errors and fraudulent reporting of usage, blood and urine pooled under wheelchairs due to lack of staff action, and that premature deaths have become commonplace.

“I would rather be dead than living here. This home is like a killing field,” one veteran, who wished to remain anonymous, told Stream.

Missouri Lieutenant Governor Mike Parson’s office has conducted its own investigation over the past several months, revealing similar allegations of mistreatment and inadequate care of residents.

“I am deeply concerned by the allegations of mistreatment and inadequate care towards veterans of our armed forces at the Missouri Veterans Home in St. Louis,” Parson said in a press release. “My office has conducted numerous interviews with family members as well as current and formers staff members of the facility to document their experiences in the hope of enacting needed change. We are also troubled by allegations of higher than average use of anti-psychotic medication on an as needed basis. As a veteran, I am personally offended by any allegation of mistreatment, and I am working with state agencies to ensure this is not happening at any veteran’s facility in Missouri.”

Parson also recommended a full investigation of allegations of mistreatment at the St. Louis Veterans Home by an independent agency in his written statement.

A spokesperson at the Missouri Veteran’s Commission said the allegations were being investigated and addressed over the summer and that improvements were made, including training and more transparency with families.

But Poholsky and others said they have yet to see these changes and are instead recommending that Carter and the MVC executive staff be terminated immediately.

“Overall any improvements they’re claiming have been made are totally false,” Poholsky said. “(Carter) may have initiated a few things but he will not act if the veterans claim to have a problem.”