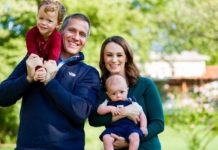 JEFFERSON CITY, Mo. — For the first time since the affair between Gov. Eric Greitens and his hairdresser became public knowledge in January, Sheena Greitens has directly addressed the allegations against her husband.

In a letter to the House investigative committee obtained by the Washington Examiner, Missouri’s First Lady says she was stalked by the now ex-husband of the governor’s mistress and disputes part of the timeline in the sex scandal.

Shortly after breaking, Greitens asked that she and her children be left alone and was on many calls made to members of the legislature from the Governor.

Greitens says in the letter that the ex-husband “put real effort into this” detailing allegations of an “escalating campaign of harassment and spying” over a two year period by the now ex-husband.

“When I didn’t respond to his anonymous emails, he sent me a letter,” the Washington Examiner cites Sheena Greitens writing. “When a letter to me didn’t produce the desired response, he contacted my parents. When letters didn’t satisfy him, he made his accusations public on Twitter. And finally, when targeting our family on social media didn’t fulfill his agenda, he secretly recorded his wife admitting to the affair and began shopping the audio tape to news outlets.”

According to public filings, Greitens did not press charges for said pursuits.

In the three-page letter to the special investigative committee — which was formed following a grand jury indictment of Eric Greitens on a felony of invasion on privacy — Sheena Greitens also points out timeline inaccuracies.

The ex-husband alleged that while Sheena Greitens was in the hospital giving birth to her second child, Eric Greitens made physical contact with the unnamed woman. This allegation was not corroborated by the woman on the tape of the mistress describing the affair.

“Mr. S claimed that my husband was with his ex-wife, and hit her, while I was in the hospital giving birth,” Sheena Greitens writes in the letter. “Nothing like that ever happened — and both Mr. S and his ex-wife know it. I know, because Eric was with me during the birth of both of our children. (As the women reading this will know, labor and delivery is not a process in which one misplaces a husband without noticing.)

“And it wasn’t just that Eric was with me. The affair took place in a different year than the ones in which our children were born. That this story was a flat-out lie should have been obvious, but the news outlets ran it without checking basic facts. What makes me deeply angry about this is that Mr. S and his ex-wife, have allowed this public lie to stand for months, while I have had to explain to my closest friends that Eric had not, in fact, missed the birth of either of our sons. It was a terrible lie, and it turned a private, joyful moment—the birth of our child—into a public, malicious distortion.”

The news of the letter came the same weekend that Sheena Greitens was awarded the 2018 International Studies Association Best Book Award for ‘Dictators and Their Secret Policy.’ The First Lady has held private academic lectures since the scandal broke and maintained a consistent academic and pro-SB 850 social presence.