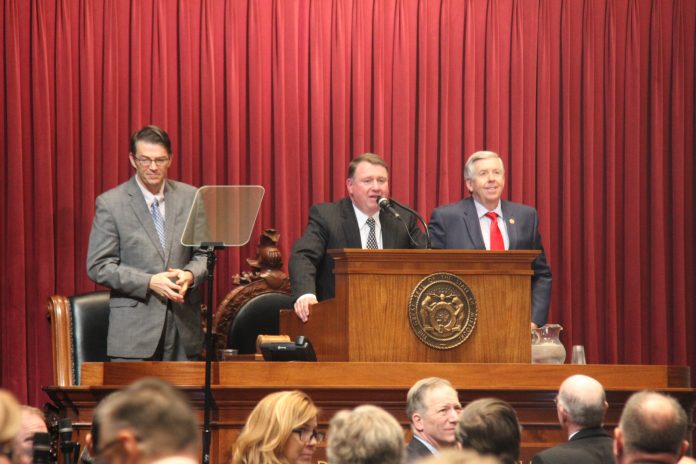 JEFFERSON CITY, Mo. – “I am happy to report Missouri’s judiciary is in good shape,” Chief Justice Zel M. Fischer said while delivering the 2018 State of the Judiciary.

Speaking before members of the Missouri Legislature, lawyers and lobbyists during the Wednesday address, Fischer spoke of the challenges and the victories that Missouri has faced.

He noted that Missouri’s decision to join the uniform bar examination has proven to be a solid move, reporting another 29 jurisdictions have now joined the Show-Me State in using it. He also boasted the impressive feats in technology and innovation, as the Missouri Judiciary was ranked third in the world for the best use of technology used to improve court services and public access.

In his address, Fischer highlighted four key areas in which the three branches can work together to continue pushing Missouri forward: the work of the Justice Reinvestment Task Force, through the expanded use of drug treatment courts, continued emphasis on criminal justice reform, and cooperative evaluation of the efficient management of the judicial resources.

“As I am sure you are aware, Missouri continues to face challenges in its criminal system. While, nationally, violent crimes are decreasing, it is not true for Missouri,” he said. “As a result, we are spending more on corrections than ever before.”

Last May, Missouri began their request for assistance from the U.S. Department of Justice and their Bureau of Justice Assistance, kickstarting the Justice Reinvestment Task Force.

“Through this public-private partnership, we hope to keep corrections spending in check, reinvest those savings in evidence-based strategies to reduce recidivism and, ultimately, and most importantly, to enhance public safety for all Missourians,” Fischer said.

He said that the task force is currently developing legislative options for consideration, and said that he is optimistic that they will produce significant and meaningful improvements.

Treatment Courts and the Opioid Crisis

Calling for expanded drug treatment courts, Fischer spoke of the statistics of victims of opioid overdose.

He also stated that admission into programs had dropped an average of 23 percent following a 27 percent core reduction in funding during the current fiscal year. He also stated that there are 15 counties that do not have any access to any type of treatment court.

He pledged to work with legislators this session to expand that access, saying that the “success of our treatment courts has largely depended on the cooperation we have had from our partners in the legislature.”

“If we are to break the cycle of drugs and crime, every Missourian in need should have a treatment court program within reach,” he said.”

Fischer spoke about the work of a Court-established task force on criminal justice, which is looking into ways on how to improve the way that courts impose fines, fees, and costs, and identify technological opportunities. He said it was part of a broader effort to move away from bail release decisions.

“It seems obvious and important that – before a trial is held and guilt or innocence is determined – we reserve our jail space for those who pose the most danger to the community or risk fleeing the jurisdiction, and not those who simply may be too poor to post bail,” he stated.

He noted that even short jail stints can mean missing school or the loss of jobs or housing.

Fischer also addressed concerns about prison overcrowding and growing spending on incarcerations. He said another Missouri task force is developing legislative proposals for lawmakers to consider.

Fischer said that the judicial branch has made significant strides in assessing their own internal operations in an effort to be more efficient and effective. He noted that, because of their work, they have dissolved the last two judicial partnerships.

Fischer finished his address by thanking his parents in a heartfelt message, saying that his journey to becoming the Chief Justice of the Missouri Supreme Court was a testament to them and “proof beyond any reasonable doubt the American Dream is alive and well in Missouri.”