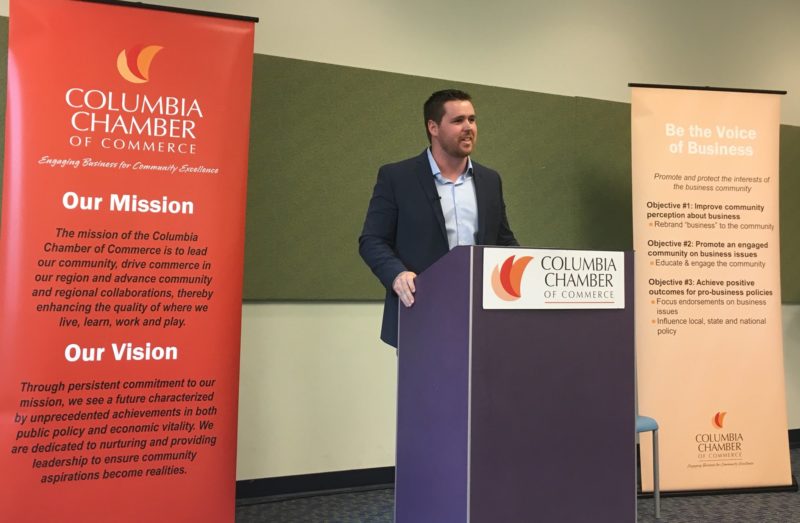 COLUMBIA, Mo. – Rep. Scott Fitzpatrick is gearing up for his second year as the House Budget chair, and following an impressive first session, the Republican lawmaker knows that the next fiscal year will be just as trying, if not more.

Fun fact: House Budget Chair @FitzpatrickMO is #MizzouMade and, at 30 yrs old, is among the youngest state budget leaders in the country. #moleg @Mizzou @COMOChamber pic.twitter.com/cqvvYpqivv

The problem that Fitzpatrick sees right off the bat is this: trying to estimate revenues for the next fiscal year. It’s an issue that can be somewhat difficult each year, but for the next session, it comes with a unique set of challenges.

“It is going to be difficult to come up with an estimate of revenue with that hanging over our head,” he said at a Columbia Chamber of Commerce event on Tuesday.

Missouri’s revenue collections have been recorded as swinging somewhat drastically from year to year, but Fitzpatrick notes that when averaging each two-year-period together, Missouri’s collected revenue evens out somewhere in the realm of 4 or 5 percent.

“Since I’ve been in the legislature, we’ve seen these huge swings in the changes in the revenue. But we’re seeing a decent average,” he said. “Revenue growth has been sporadic, but it has been decent. And we should be able to live within our means on that. But the cost on mandatory expenses has been a lot more than that.”

That’s why his number one goal for the next session is to try to hold down the mandatory expenses, or the spending on certain programs, like Medicaid, that are required by law.

Meanwhile, a new tax cut is taking effect in the Show-Me State. SB 509, passed in 2014, is taking effect in 2018, as revenues reached the necessary benchmark to put it into motion. If the next mark is hit, then it continues to the second stage in the next year. The estimated impact of those tax cuts is expected to be somewhere around $150 million annually. (As it takes effect in January, roughly the midpoint of the current fiscal year it will only affect revenues by about $80 or $90 million for this cycle.)

But even that comes with more uncertainty as tax reform legislation is being debated in Congress, with officials waiting to see what federal government will do. If federal tax policy change prevents state revenue from growing, then it would keep the second phase from taking effect.

Fitzpatrick said state legislators could change the law to use a fixed dollar amount instead, which opponents would most likely consider to be a tax increase.

But losing $1 billion in state revenue would be devastating to a state with an already tight budget. When asked by reporters, Fitzpatrick said that if it came down to losing $1 billion, he’d convince his fellow lawmakers to make the change. However, he said he would prefer if Congress would rather adjust the rates downward to cut federal taxes.

“I would prefer to see rate reductions at the federal level, for one reason that it makes my job a lot simpler, not having to deal with it,” he said.

“But I am sure that Congress does not care what I say,” he added with a smile.

Fitzpatrick says that the good news is that revenue collections have been strong this year.

“We finished last year below where we had anticipated by roughly $100 million, which when you’re talking about a $9 or $9.5 billion revenue stream, you can miss it by $100 million and it’s not terrible,” he said. “But, when you’re relying on all of that money to make the budget work… well, it’s not a lot of money until you don’t have it.”

“We had to grow more in this fiscal year to make the budget balance,” he added, noting that the estimates are made for two-year cycles. “If we’re wrong on the first year, we’re automatically wrong in the second year. We needed to grow about 4.25 percent this year. As of yesterday, we were at 4.24 percent.”

The state did set aside $100 million as a sort of rainy day fund, hoping to insulate against unforeseen costs and expenses or reductions in revenues.

“If one thing doesn’t go according to plan, then the budget doesn’t work,” Fitzpatrick said.