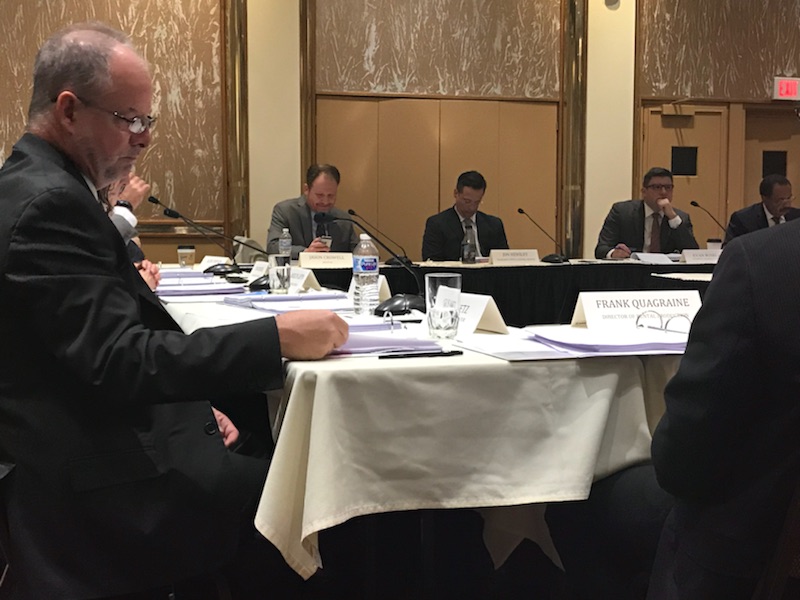 COLUMBIA, Mo. – At the rescheduled Missouri Housing Development Commission (MHDC) meeting Friday, six men voted in an executive suite at the Holiday Inn to support a draft motion to not issues tax credits for FY2019.

Over an estimated 150-200 people, ranging from tax credit housing residents, lawmakers, and stakeholders looked on as only Lt. Gov. Mike Parson and state Sen. Jamilah Nasheed, D-St. Louis City, spoke more than briefly about what tax credits meant to Missourians.

The Governor’s Commissioners told other commissioners including Attorney General Hawley, prior to the meeting that if they did not vote for the urban-only scheme today, the federal tax credits would not be renewed, which is not true. Parson was ultimately one of two votes out of 8 to oppose the motion. His remarks, met with applause multiple times, relayed concern about an executive commission making funding decisions unilaterally and without citizen involvement, such as through the legislative process.

“I think that it is really important not to make any drastic changes likes this,” Parson said. “If we are going to do away with [housing tax credits], it should be the Governor and the legislative body to do that, not a handful of people. The truth of the matter is, if we don’t have these [housing tax credits], they’re not going to get done.”

Parson also noted that he could not believe the commission was “going down this road,” and noted that tax credit recipients have “followed the law. If you want reform, I’m open to talk about reform, but try something else other than this.”

Parson invited Nasheed to speak, who echoed some of Parson’s comments.

“I’m here representing the people,” Nasheed said. “We have young men and women who are looking for affordable housing. The last thing we need to do is go after the poor and disabled. … To do away with the state portion [of housing tax credits] is appalling.”

Parson made the last remark before the vote noting the legislature will likely take up the issue of tax credit reform regardless of the Governor’s Commission vote.

“You talk rural vs. urban, we need to get away from that and start coming up with solutions,” Parson said.

The Commission will make a final vote on the draft at a future meeting.

The remainder of the items on the Governor’s Commission agenda was passed.

In addition to passing a draft to not fund tax credits, the Governor’s MHDC also saw the swearing-in of a new member, Alan Simpson, an attorney from Graves Garrett.

After the meeting, residents of housing made possible by tax credits flooded the hotel lobby, clearly upset and talking to each other and to press.

Carol King, a resident of a Columbia housing development, said her development wouldn’t have made housing possible for many veterans in her apartment complex.

“I’m a widow of a veteran,” King said. “My son is a veteran, my brother is a veteran, many of my neighbors are veterans. If we take away this tax credit, what housing are we going to be able to find? I live somewhere nice and it’s because of this tax credit they want to take away. If they care about veterans and the disabled and the elderly, they’ll keep tax credits.”

Another resident noted that if these tax credits are taking away, she’s afraid that no more affordable housing will be built for people like her.

“I love my building,” Althea Sloe said. “I love the security. I love the managers. My apartment wouldn’t be here without the tax credit. These men in suits think they know what’s best for seniors but they don’t.”

The Commission is scheduled to meet again on December 19 at the DoubleTree Hotel in Jefferson City.