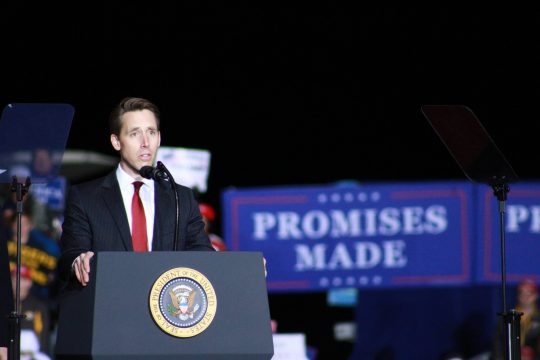 JEFFERSON CITY, Mo. — The Show-Me State will soon be represented by two Republicans in the United States Senate, with a blue seat flipping red with the win of Josh Hawley.

In what was considered to be a neck-and-neck race, as more results came in, the sitting Missouri Attorney General inched ahead to a distinct lead over incumbent-Democrat U.S. Sen. Claire McCaskill.

“Tonight, the good lord and the people of Missouri have given us a victory,” the Senator-elect told a cheering crowd. He mentioned that McCaskill had conceded the race and he already had spoken to President Donald Trump.

Hawley’s win means Gov. Mike Parson will need to appoint an attorney general who will serve through 2020.

The senate seat had been held by McCaskill since 2006, when she narrowly defeated incumbent-Republican U.S. Sen. Jim Talent. McCaskill looked on track to lose in 2012, but ended up handily defeating GOP candidate Todd Akin, who claimed in an interview that a woman could not get pregnant as a result of “legitimate rape.”

But it appears McCaskill’s luck ran out this cycle. The Show-Me State swung dramatically red in the past decade, electing a Republican super-majority in both state chambers and supporting President Donald Trump by nearly 20 points in 2016.

“What I feel the most pain about tonight, are all of the people who, some for the first time in their lives, said ‘I’m gonna do more than just sit on the couch and cuss the tv, I’m gonna show up, I’m gonna work hard,'” said McCaskill. “And for the thousands of people who worked on this campaign. I’m so grateful and I want you to keep that fire burning because there is justice around the corner.”

Throughout the campaign, Hawley highlighted McCaskill’s voting record on Trump’s priorities including the tax cuts, Supreme Court nominees, and building a wall along the southern border. He called the sitting-Senator a “career politician,” saying she had lost touch with Missourians and that it was time to “Fire Claire McCaskill.”

Trump himself campaigned for Hawley on five separate occasion — two times within the last week — telling voters in Missouri to “vote Republican.”