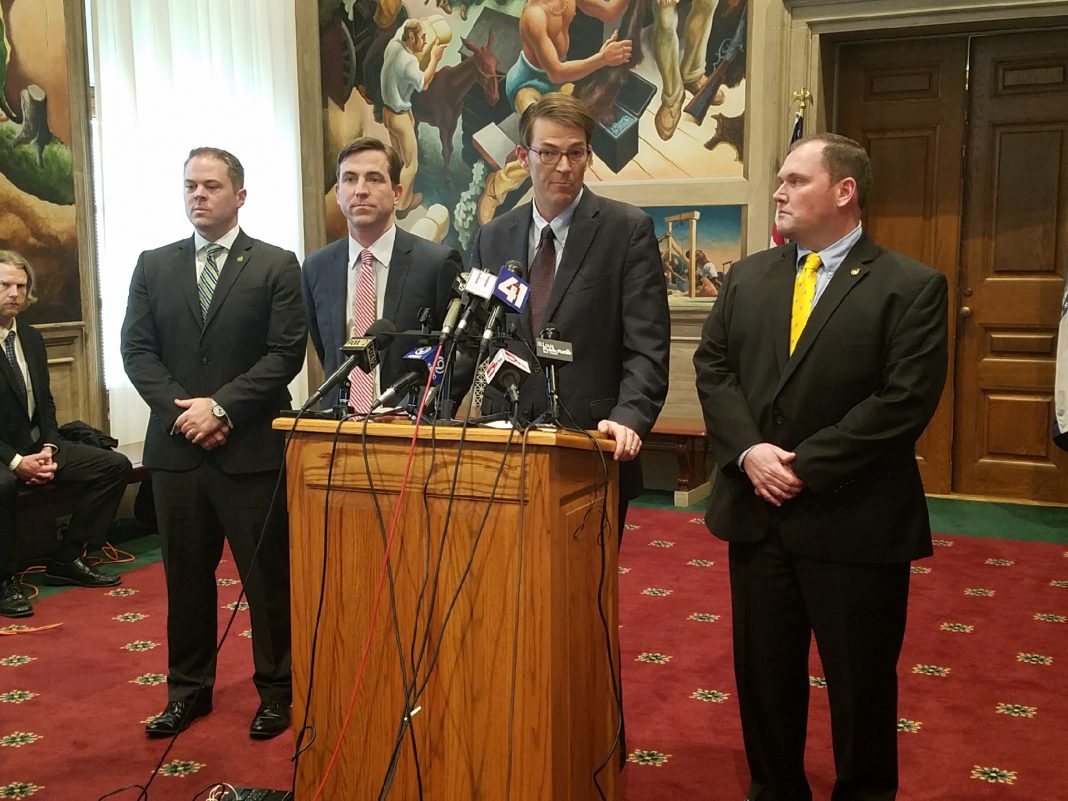 JEFFERSON CITY, Mo. — The Missouri House is moving forward with their investigation into Gov. Eric Greitens following his indictment by a grand jury last week.

“We will carefully examine the facts contained in the indictment and answer the question as to whether or not the governor can lead our state while a felony case moves forward. The people of Missouri deserve no less. We will begin the process of tasking a group of legislators to investigate these serious charges.”

On Monday, Richardson, Haahr, and Vescovo announced the formation of a committee to investigate the allegations against the Governor during a press conference held in the House Lounge at 3:45 p.m.

“We have worked over the weekend and through today to formulate that committee. I’ve asked the committee to begin its work this week,” Richardson said.

Rep. Jay Barnes, a Jefferson City Republican and an attorney, will chair the committee and lead the investigation. He takes the lead role having previously served as general counsel for the Missouri Senate, as well as policy counsel and speechwriter to former Republican. Gov. Matt Blunt. He has chaired several investigative committees during his tenure in the Missouri House of Representatives, the most notable of which concerned the failed artificial sweetener company, Mamtek.

The other members of the committee consist of four other Republicans and two Democrats:

The committee’s task will be to investigate the charges against the Governor, who faces a felony charge of invasion of privacy, though the Speaker would not elaborate on exactly how the committee would go about their work.

“This committee’s task is going to investigate facts. We’re going to do so in a way that is fair, thorough and timely,” Barnes said. “And we’re going to do it without any preordained results, which means we are going to be asking questions of witnesses on both sides and hope to have a process with full involvement from everyone involved in this matter.”

Speaker Richardson did, however, confirm that the committee would have the power to issue subpoenas.

If the committee finds good cause in their investigation, they could draft articles of impeachment, which would then require a constitutional majority vote in the House, or 82 members of the House.

Following the announcement, Reps. Shamed Dogan and Marsha Haefner spoke, calling for the embattled Governor to resign from his office, citing their concerns about his ability to fulfill the obligations of his office in light of the indictment and other ongoing investigations.

Several other members of the legislature released statements on Monday concerning the Governor.

“I have great respect for the presumption of innocence and the necessity of upholding governmental integrity. I commend House leadership for establishing a committee to investigate our governor,” Rep. Dean Plocher, R-St. Louis, said. “I will work with leadership and the committee to see that the House investigation is comprehensive and transparent and hope that there is a swift resolution for Missouri’s citizens so that our state can move forward during this difficult time. There must be a full accounting of the allegations surrounding both the Governor’s actions and his ability to lead our state.”