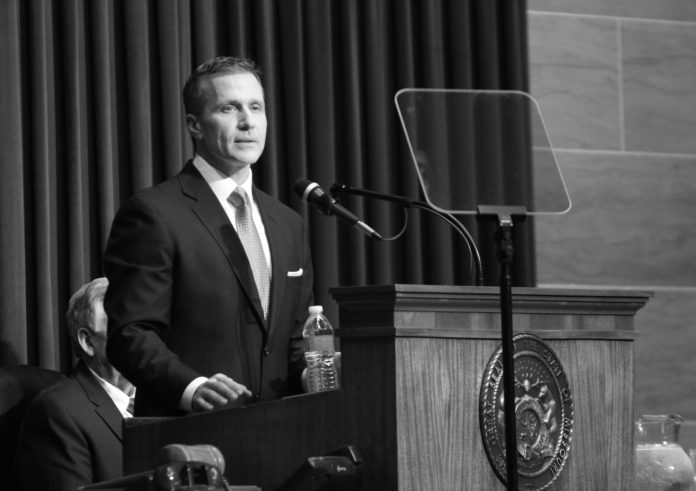 St. Louis Circuit Judge Rex Burlison has decided not to rule on a motion to dismiss the felony invasion of privacy felony indictment against embattled Missouri Governor Eric Greitens this weekend.

Burlison’s decision came a day after the defense team accused St. Louis City Circuit Attorney Kim Gardner of withholding evidence and “gross misconduct and incompetence” and reintroduced a motion to dismiss the case.

Defense attorney Jim Martin accused Gardner on Thursday of not providing the defense with a two hour videotaped interview with the Missouri governor’s former mistress in January. Greitens’ lawyers said they were told the interview, conducted by Don Tisaby, a former FBI agent hired by St. Louis Circuit Attorney’s office to help with the investigation, was lost because the video recorder “malfunctioned.”

Greitens tweeted on Thursday that “the prosecutor turned over a videotape of her interview with the woman. This was evidence that the prosecutor was legally required to turn over months ago. She purposefully kept it hidden until one hour after the false report was released.”

The governor also states that investigative report that was released on Wednesday did not contain the evidence that Gardner handed over on Thursday, and the allegations in that report will be refuted by facts, including the video, depositions, discovery, and other evidence that will be subjected to courtroom analysis.

Circuit Attorney Kim Gardner hid a video that she knew directly contradicted allegations in the House report, and she allowed her lead investigator to lie about it, under oath. pic.twitter.com/PSKGWAFe9i

Gardner responded to the governor’s statement with a motion Thursday night saying the misconduct claims are “unwarranted and appear to be an attempt to distract the court’s and the public’s attention from the merits of this case.”

In addition to the video tape being presented to the defense, Martin argued Thursday that Tisaby lied under oath when he said he did not take notes during the interview with the former mistress of Greitens in a March 19 deposition at Carnahan Courthouse.

“I’ve never in my practice accused the prosecution of incompetence and misconduct,” defense lawyer Scott Rosenblum said. “I am doing that this morning.”

First Assistant Circuit Attorney Robert Steele argued the defense’s claim that the woman is losing credibility, saying, “She has told the same account every time.”

Many lawmakers are calling for the governor to resign following the report that was released, which details the alleged conduct by Greitens with the woman who testified under oath that Greitens subjected her to non-consensual sexual activity and violence.

Burlison, who issued a gag order in the case Tuesday prohibiting all parties involved in the case from commenting on it outside the court room, said he would allow Greitens to respond to the report, saying, “he has the right to proclaim his innocence.”

UPDATE: On Friday, First Assistant Circuit Attorney Robert Steele filed a discovery letter noting turnover of the latest evidence in the case: two pictures of emails from Greitens to the woman, a pic of admin contacts, and a picture of a phone. 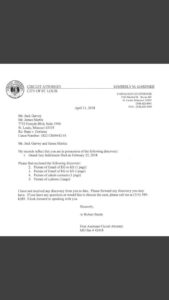