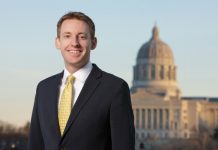 A rising star in the Democratic Party, Jason Kander has served in the Missouri House and as the Secretary of State.

Now multiple sources say he is considering throwing his hat into the Kansas City mayoral race.

If Kander decided to run for mayor, it would put to bed rumors he will make a 2020 presidential bid. There has been no official campaign committee formed with the Missouri Ethics Commission.

A former Army Captain who volunteered to serve in Afghanistan, Kander gathered national attention in his unsuccessful bid to unseat U.S. Senator Roy Blunt in 2016. In a political advertisement entitled “Background Checks,” Kander assembled an AR-15 while blindfolded and challenged Blunt to do the same. The ad went viral earning more than 1.5 million views.

Kander narrowly lost the race but Politico described it as winning by losing. He has stayed active on the political scene, has picked up more than 100,000 new Twitter followers, and a CNN contributor contract.

In 2017 Politico wrote, “To hear Democrats from Barack Obama on down tell it, Kander is the future of the party: young, energetic, an insistently progressive lawyer from a red state, a devoutly anti-Trump military veteran … and, like the Democratic Party, not currently anywhere near power.”

The Kansas City native served as an intelligence officer in Afghanistan where he investigated groups and individuals suspected of corruption, espionage, drug trafficking, and facilitating Al Qaeda and the Taliban. Kander was assigned as a combat leadership instructor in the Missouri Army National Guard’s Officer Candidate School at Fort Leonard Wood after his deployment.

In 2008, he made a successful bid for the Missouri House where he served until 2013. He was a member of the House Budget Committee. He was appointed in 2009 to serve on the Missouri Veterans Commission, which oversees all services for the state’s veterans.

After his unsuccessful bid to unseat Blunt, Kander launched Let America Vote, a political action organization. He hosts the podcast Majority 54 with Jason Kander, has penned his first memoir Outside the Wire: 10 Lessons I’ve Learned in Everyday Courage which will be available later this year, and now it looks like he may run to add mayor to his resume.