As a judge in Steubenville, Ohio, recovers from being shot Monday by an angry parent of a teenager convicted of rape in 2013, St. Louis County judges are reminded of an infamous courthouse shooting here in 1992. 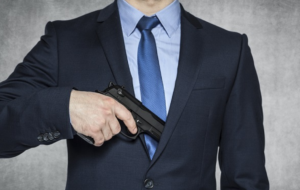 Kenneth Baumruk had two .38 caliber handguns in a briefcase when he attended his divorce hearing at the St. Louis County Courthouse in Clayton. His first victim was his estranged wife, Mary, who died from two shots to the neck. The next two targets were his own lawyer, Garry Seltzer, and his estranged wife’s lawyer, W. Scott Pollard. Baumruk also managed to fire shots that found their mark on Bailiff Fred Nicollay, security officer Wade Dillon, and aimed but missed at three police officers, an investigator, and the judge.

Police returned fire and brought him down with nine shots, two to the head, which he survived. Baumruk spent the next nine years under medical care while the court system battled over whether he was competent to stand trial. He was eventually sentenced to death, and died of natural causes at the age of 75 while on Death Row.

That brought to the forefront of the conversation courthouse security, and the protection of those who work there.

“Security was a primary concern in the redesign of our new courthouse,” said Christine Bertelson,public information officer for the St. Louis County Circuit Court, also known as the 21st Judicial Circuit. “In addition to the security checkpoint at the main entrance to the building, there is secured parking for judges, as well as secured courtrooms and hallways that make it more difficult to get in where a judge might be.”

It’s not lost on judges that they are dealing with issues that profoundly affect people’s lives, sometimes permanently altering their future.

“Judges are not here doing things that make people happy on their best day,” Bertelson said. “Every now and then a judge gets shot – as just happened, tragically, to the judge in Ohio. Judges have even been shot through a window outside their chambers. That’s why we have taken such a conscientious approach to safety here in St. Louis County.”

So do some judges carry firearms?

“The Constitution allows judges to carry a firearm. Some do and some don’t; we don’t ask them that question,” she said. “Some don’t want anything to do with weapons of any kind. Some don’t even want their bailiffs carrying a firearm. But some do.”

Another component that can add to unchecked tempers is the increased number of people who represent themselves in court, Bertelson said.

“Ironically, it’s not the criminal cases where people tend to get the most upset; criminal defendants tend to know what they have done,” she said. “Typically, it is the family courts and juvenile courts, with divorces and custody battles, where the emotions run high.”

As was the Baumruk case, and the case in Ohio.

In fact, the same day Baumruk opened fire in the Clayton courtroom, a judge was critically shot in Grand Forks, N.D., as he presided over a child-support hearing. Weeks later, a woman was stabbed to death in a Milwaukee courthouse as she sought a protection order against her estranged boyfriend.

More recently, a man in court on domestic violence charges in Goodwater, Ala., attacked an officer and tried to take his firearm. And just two months ago, two deputies were shot and injured in Coffee County, Tenn., when an inmate wrestled a firearm from a bailiff.