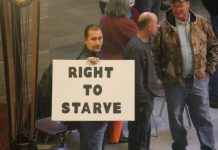 JEFFERSON CITY, Mo. — A resolution seeking to move the right-to-work referendum from the November ballot is moving forward in the Missouri House.

HR 102, sponsored by Rep. Holly Rehder, proposes to move the ballot initiative from the November 6th general election to the August 7th primary.

Faced with the resolution on Tuesday, the House Economic Development Committee voted 8-4 on partisan lines to move Prop A out of committee.

The reason for this swapping of dates could be attributed to a number of reasons.

Republicans say that is to give the voters a quicker chance to weigh in on the matter, while Democrats maintain that it’s a political move to place the bill within an election with a lower expected turnout.

It also could be moved to August so as to prevent an increase of labor union members casting votes in November, when Republicans are hoping to unseat incumbent U.S. Sen. Claire McCaskill.

“When passing Eric Greitens’ right-to-work law last year, the Republican legislative majority adamantly opposed letting voters decide the issue because they feared Missourians would defeat it. Now that it is slated for the Nov. 6 general election ballot anyway, they are terrified voter rejection of right-to-work will cause collateral damage to Republican legislative candidates,” Rep. Doug Beck said in a statement. “Instead of being moved to the lower-turnout August primary, Democrats believe this measure should stay on the November ballot as the more than 300,000 Missourians who signed the referendum petition are expecting. But either way, we are confident Missourians will reject this blatant attempt to weaken worker rights.”

Rehder dismissed those allegations, saying that she believed they would get “an exceptional turnout” in the August primary with that item on the ballot.

This all arises after the passage of right-to-work, also sponsored by Rehder, during the previous legislative session. It was signed into effect by Gov. Eric Greitens, but state labor organizations collected more than 300,000 signatures to put the question on the ballot and let voters decide.

The resolution now moves to the House floor for consideration.

2,042 thoughts on “Legislation to move right-to-work to August ballot advances out of committee”