Libla, Romine lead the Senate in call for Attorney General to investigate allegations against Greitens 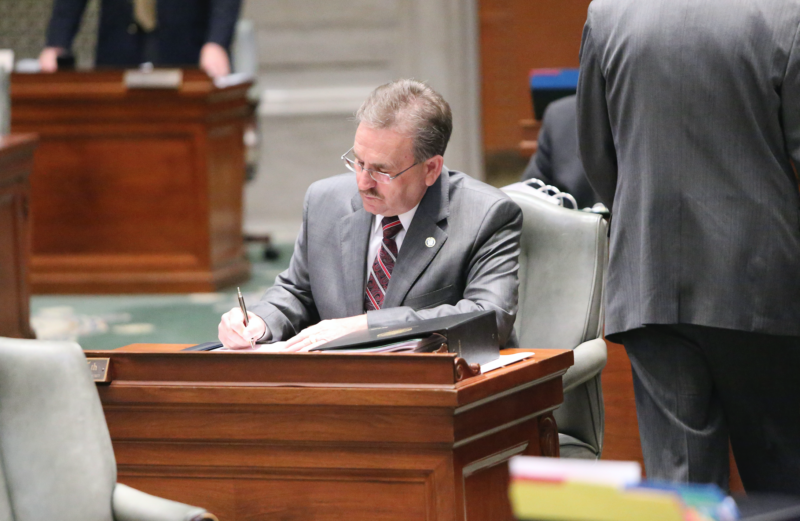 JEFFERSON CITY, Mo. — Less than 24 hours after a report alleging misconduct in the form of blackmail and infidelity by Gov. Eric Greitens, the Missouri Senate is speaking out.

The Senate on Thursday morning returned to the chamber, with one topic on their tongues. Sen. Jamilah Nasheed was the first to issue a call for the resignation of Gov. Greitens.

“I’m calling for every female in this building to rise up,” Nasheed said on the floor. “For individuals to want to be silent on the issue, it makes me want to cry.”

Following the news that broke after the Governor’s second State of the State address, Senate leadership issued the following statements:

“In light of the very serious allegations made against the governor, there are many questions still left unanswered. But let’s be clear – violence and threats against women are never acceptable. Allegations of extortion, coercion, or threats of violence must be investigated by the proper authorities. People accused of these egregious acts do not get to waive off the scrutiny of law enforcement simply because they are in a position of power; and victims of these crimes deserve our full support,” said Senate Minority Leader Gina Walsh and Sen. Kiki Curls

Sen. Rob Schaaf has been at odds with the Governor since the last session, criticizing him for a lack of transparency after A New Missouri, a so-called “dark money” group connected to the Governor launched a flurry of attack ads against the senator on social media.

His reaction on Wednesday night was of few words: “Stick a fork in him.”

But the real news of the day from the Senate floor came from Sens. Doug Libla and Gary Romine. Speaking on the floor, Libla read a letter that was penned to Attorney General Josh Hawley, calling on the Republican to mount an investigation into the the Governor’s.

“Dear Attorney General Hawley:
We are writing regarding the allegation of blackmail made against Governor Eric Greitens as reported by KMOV 4, and to ask you to open a formal investigation into the matter.
The seriousness of this allegation and the implications it will have on the integrity of our state government are deeply disturbing. These alleged actions have cast another dark shadow over the Missouri State Capitol, therefore we believe this investigation must be thorough and completed in an expedited manner so that this will not overpower this legislative session.
Thank you.”

Romine rose after that to speak with Libla on the matter, saying he wanted to make sure that the main intent of the letter was to resolve the issue “in the most expeditious manner possible.”

Both men urged their colleagues to sign the letter.

“All we’re asking for is a quick review and a quick investigation so we can move on about our business,” Libla said. “These allegations are widespread all over social media, and they’re serious in nature.”

“We don’t want this to be a media circus, with all of the rumors going around,” Romine added. “Rumors are going around that Austin Chambers is back in town and that he’s going to take care of this PR nightmare. These are the kind of things we do not want to be dealing with. We want to make sure that we address this issue in a professional and precise manner.”

After the Senate adjourned, Romine confirmed that Libla intended to deliver the letter with its signatures to the AG’s Office as soon as possible. Hawley is currently running for the GOP nomination to challenge U.S. Senator Claire McCaskill in 2018, and has already launched one investigation against the Republican governor for his reported usage of a text-deleting application.

Romine said that the evidence needed to be confirmed or denied, and that would determine how things progress forward, but described the general reaction of his colleagues as stunned.

“It’s hard to react to this, and most folks don’t want to react because we don’t know what is rumor or what is fact,” he said.

“We do realize this is a very sad day for the state,” Romine added. “The most important thing that we can do, the most critical thing we can do, is to resolve this as quickly as possible and find out what the facts are aside from all of the rumors and gossip.”

4,313 thoughts on “Libla, Romine lead the Senate in call for Attorney General to investigate allegations against Greitens”