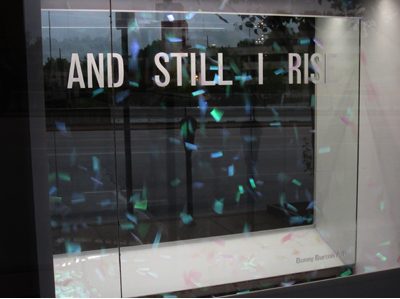 The confetti that was supposed to fall from New York City’s Javits Center ceiling to celebrate Hillary Clinton’s historic win is now art.

Local artist Bunny Burson spent two weeks tracking the confetti down after it was boxed away.

Burson wanted to turn Clinton’s defeat into an inspiration for women before the 2018 election cycle.

A long-time Clinton supporter, Burson served on Hillary Clinton’s steering committee in Missouri and was executive director of Bill Clinton’s Committee on the Arts and the Humanities.

The confetti now sits in the window of Bruno David Gallery, a symbolic glass ceiling that—according to Burson—women should strive to break by pursuing their own dreams.

“And Still I Rise” is on display through August 12 at Bruno David Gallery in Clayton.