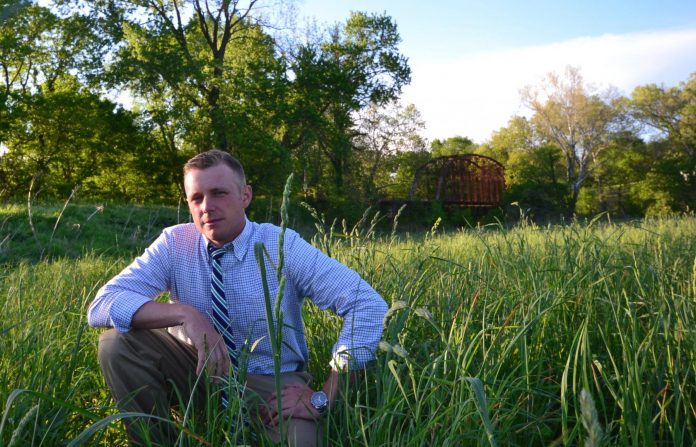 “Are you as embarrassed as I am?” Chase Crawford, Rep. Warren Love’s announced Democratic opponent for 2018, asked in response to a three-hour hearing over a Facebook post.

The Thursday afternoon ethics hearing stemmed from Rep. Warren Love, R-Osceola, posting in August that those responsible for vandalizing a Confederate monument should be “found and hung from a tall tree with a long rope.”

Under oath, Love said he would submit to the mercy of the panel. However, when the committee voted 6-4 for a written reprimand, Love declined to accept the decision.

“He didn’t keep his word — and where I’m from — your word is your bond,” Crawford said.

Crawford, a Democrat, is running for Love’s seat in the Missouri House of Representative. District 125 includes Benton, Cedar, Hickory and St. Clair counties. Crawford is on the Hickory County Board of Commissioners, an auctioneer and a self-proclaimed Freemason.

Using the hearing as pedestal in the race, Crawford stated, “When the voters in my area talk with me, we discuss roads and the opioid epidemic, the rising costs of healthcare, and how we don’t mind paying taxes as long as they being put to good use.

“Today, representative Warren Love wasted my tax dollars — and yours too.”

Friday morning, he hit again, reaching out to his email list talking about “Lyin’ Love.”

“Warren Love has called for a lynching,” Crawford emailed. “He has lied under oath.
He said Abraham Lincoln was a tyrant and called a black man a ‘negro.’ Lyin’ Love disregards this all as ‘cowboy talk.’ It’s not. A cowboy is honest. A cowboy’s word is his bond.  And prancing around Jefferson City in a cowboy outfit doesn’t make you one. I’d even guess that lying to the other cowboys is a good way to get yourself tarred and feathered.

“Instead of wasting our taxpayer dollars deciphering your old-timely talking, the elected officials in the state capital need to work to reduce the costs of healthcare and insurance, fight the opioid crisis, and ensure our students and workers get the education they need to be competitive in 2018,” Crawford continued. “Lying Love, you are what’s wrong with Jefferson City. It’s time you get on your horse and head on home.”