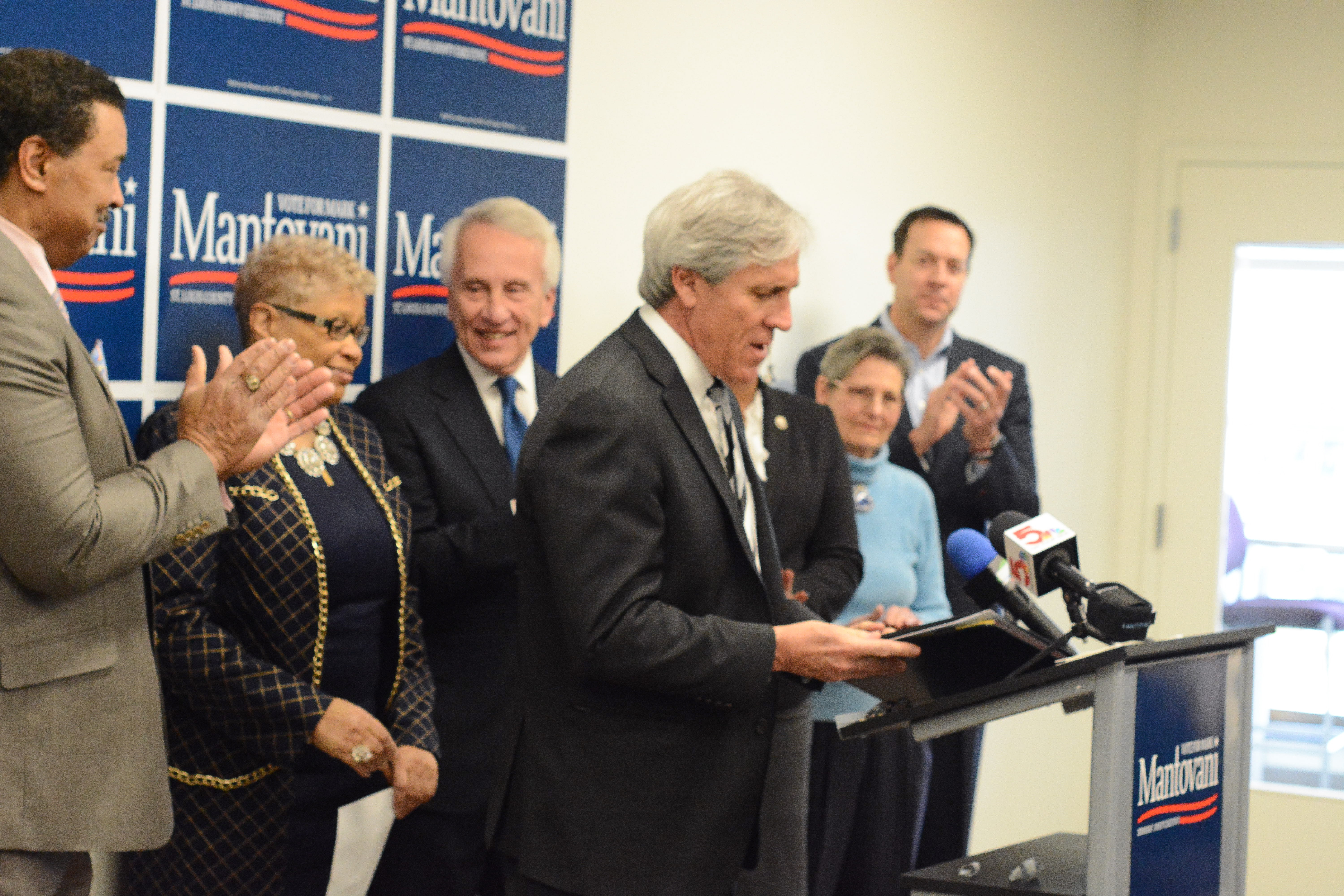 A St. Louis County Executive challenger is disputing a new poll that showed him losing to his incumbent opponent in the Democratic primary election race.

The poll, conducted by Remington Research Group on behalf of nonpartisan Missouri Scout and released Saturday, showed current County Executive Steve Stenger leading Mark Mantovani, a lawyer and former CEO and chairman of the marketing firm Ansira, by 35 points — 50 percent to 15 — and about 28 percent still undecided.

The poll surveyed 564 likely 2018 voters over two days last week, with a margin of error at 4 percentage points.

A recent press release, issued by Mantovani’s campaign, called the Missouri Scout poll an outlier and said it “should not be taken seriously by anyone who believes in using scientific research as a means of ballot testing before an election.”

“The Missouri Scout poll is simply a bad poll. Aside from not stating the County Executive candidates accurately, it’s methodology is so suspect that it renders it useless as a barometer of where this race stands,” said Grant Campbell, campaign manager for Mantovani.

The Clayton Times reached out to Titus Bond, the president of Kansas City-based Remington Research Group, a political and corporate polling firm owned by Axiom Strategies, who said he stands by his numbers.

“They talk about their numbers but they don’t talk about anything else. They make wide and broad statements without pointing to specific data or facts,” Bond said. “This was a public survey with questions requested by Missouri Scout and we just reported back the date we acquired.”

In the press release, Campbell vehemently disagrees with Remington putting Stenger at 50 percent, stating, “Our internal polling, done by live interviews of landline and cell phone households without weighting for demographic short falls, has the incumbent County Executive Steve Stenger under 50 percent — an indicator of real trouble with voters — and it shows Stenger with huge negatives and embarrassing job approval numbers…”

However, when asked for more specific internal polling numbers, Kris Brill, Mantovani’s campaign spokesperson said they could not provide them at this time.

Another issue taken up by the Mantovani campaign asked why Bill Ray’s name appeared on the question issued to voters since he recently withdrew from the race. A real estate agent from University City, Ray pulled in 7 percent of the votes in Remington’s poll, a stat Mantovani’s campaign called a glaring mistake.

Bond said the questions were submitted by Missouri Scout on their own but even though Ray withdrew his name from the race, it will still appear on the ballot in August, which is why they left him on.

In contrast, Bond pointed out that Bob McCulloch, who is running for reelection as St. Louis County Prosecutor against Ferguson Alderman Wesley Bell, is losing the African-American vote 54-13 percent, according to Remington’s survey results.

Mantovani’s press release also said that Remington “completely blew it” when predicting both the turnout demographics and the election itself in the St. Louis mayoral race of 2017.

Remington has taken some flack and ridicule before, Bond said, for correctly predicting Stenger would beat Charlie Dooley in 2014, then again in 2016 when the research group had the most accurate methodology in predicting a presidential win for Donald Trump.

“We have a very strong business and I think if there were any issues with our methodology we wouldn’t have such a strong business,” Bond said. “I’m a Republican pollster, this is a public survey and I don’t have a dog in the race. I’m just reporting back the data that we’re acquiring.”