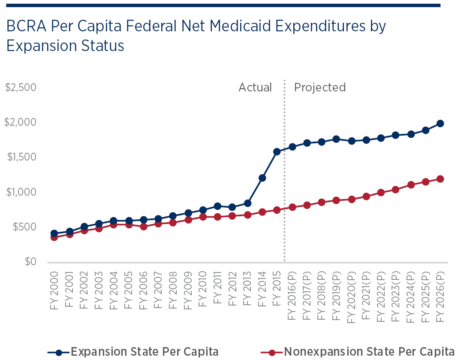 JEFFERSON CITY–It seems that Missouri’s decision not to expand Medicaid under the Affordable Care Act will continue to put the state at a disadvantage.

According to a review of the U.S. Senate’s Better Care Reconciliation Act (BCRA), the 19 states that did not expand Medicaid under the ACA will forego $737 billion in net federal Medicaid outlays by 2026, compared to the states that did expand.

The research, released jointly by the Missouri Hospital Association and Texas Hospital Association, took a look at how federal funds would flow to both expansion and non-expansion states. They found “a continued significant imbalance in federal spending in expansion states even after accounting for the restoration of cuts included in the ACA and additional safety-net funds included in the BCRA.”

“Missouri and the other 18 states that did not expand Medicaid are asking for Congress to address the issue of fundamental fairness,” Herb B. Kuhn, Missouri Hospital Association President and CEO, said. “The BCRA fails to improve the broad inequity in the U.S. House’s earlier bill, the American Health Care Act. Since the Senate has paused to redraft the legislation, we’re asking that they coolly and systematically address the Medicaid inequity embedded in the AHCA and first version of the BCRA — which widened, rather than closed, the equity gap.”

The BCRA of 2017 is projected to reduce federal spending on Medicaid by $772 billion between 2017 and 2026, resulting in 15 million fewer Americans enrolled in the program. But the estimates also project that federal spending on Medicaid in expansion states by 2026 will be $1,987 per capita compared to $1,192 in non-expansion states — a relative difference of 67 percent. 

“States that didn’t expand are already disadvantaged because they have forgone billions in federal health care dollars to their citizens and increased financial stability for their health care systems,” Kuhn said. “The BCRA’s imbalance in long-term investments will create haves and have-not states. The legislation recognizes this inequity but falls far short of closing the gap. The Senate should address this issue, and other issues within the legislation, before attempting to move it forward.”

You can read the full report here.