NARAL Pro-Choice Missouri, coalition partners and local activists “Unite for Justice” in St. Louis to urge Senators to Vote No on Brett Kavanaugh 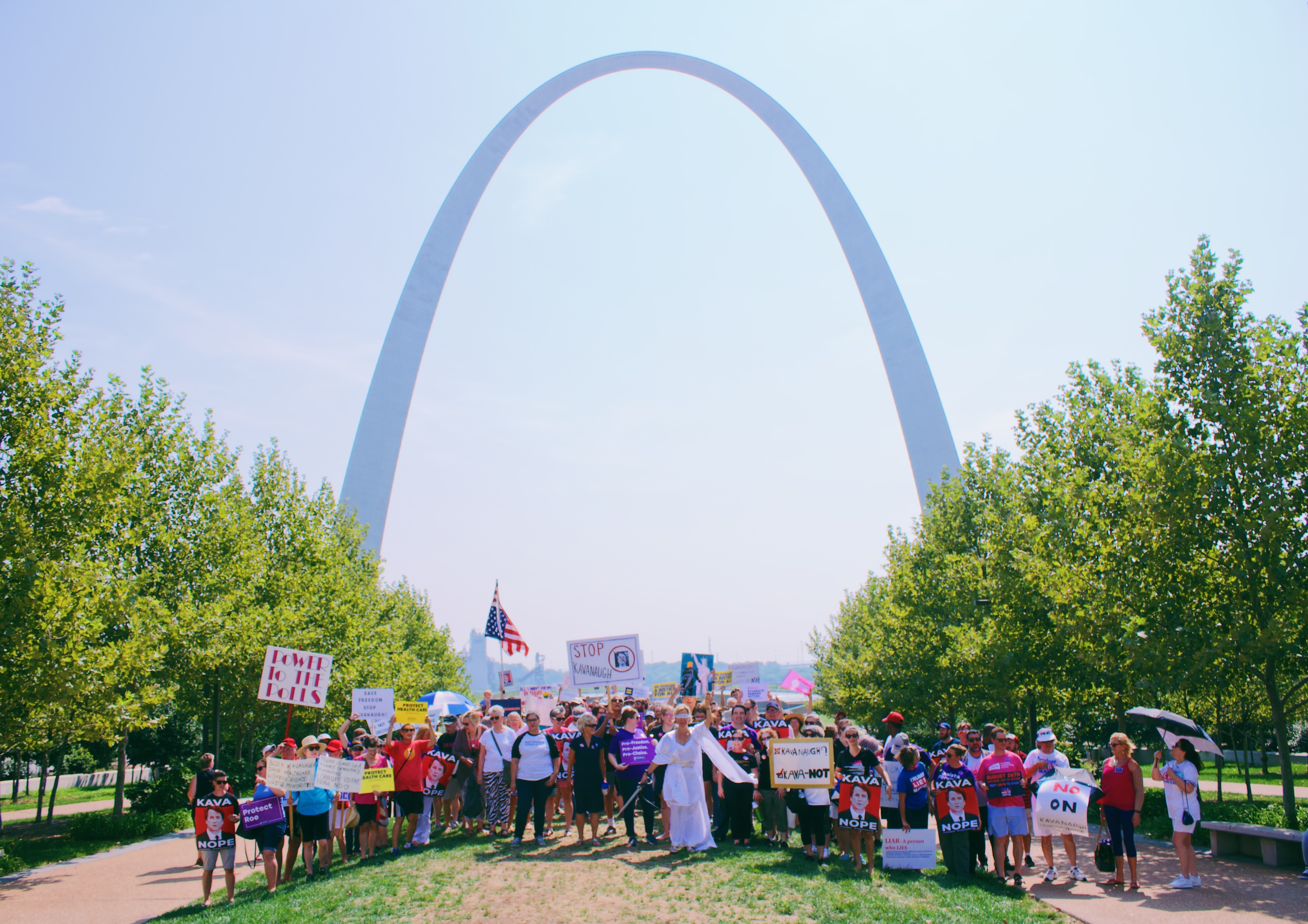 “Today, we stood united and advocated for the majority of Americans who do not want to see Brett Kavanaugh, one of the most Conservative nominees in history, make it on the U.S. Supreme Court where he could do long-lasting damage to our rights,” said Alison Dreith, Executive Director of NARAL Pro-Choice Missouri. “Only 28% of women across party lines want to see Kavanaugh confirmed because we know that he would gut Roe v. Wade, criminalizing abortion and punishing women for choosing if, when and how to start a family. We cannot let it get to that point, which is why we need Sen. McCaskill and Sen. Blunt to vote no on Kavanaugh.”

“If Brett Kavanaugh is appointed, our nation’s bedrock public health and environmental laws–like the Clean Air Act, the Clean Water Act, and the Endangered Species Act–will be at risk. And Kavanaugh’s troubling record raises very serious concerns about where he stands on issues like the climate crisis, public health, civil rights, and health and safety in the workplace,” said Natalie Lucas, Sierra Club Board Member

“The stakes have never been higher for the LGBTQ+ community with the nomination of Judge Kavanaugh to the Supreme Court,” said Sarah Garber, Human Rights Campaign Board of Governors. “This is someone who would undermine LGBTQ+ equality and turn back the clock on reproductive freedom and affordable healthcare. The Senate must reject this nominee and we must keep organizing, mobilizing, and turn out the vote like never before in November.”

“Donald Trump promised to nominate a judge for the Supreme Court that would overturn Roe v. Wade,” said Robin Utz, Defending Grace. “Without the personal liberty protections offered by Roe v. Wade, I wouldn’t have been able to make the decision to have an abortion in November 2016, 9 days after Trump was elected, and after learning that my very wanted daughter would die a horrifically painful death should she even make it to birth due to a fatal disease. My husband’s and my decision to have an abortion to spare our daughter Grace’s pain is one that politicians have no business being a part of, and that desperately needs to be defended and protected by our Supreme Court justices.”

“We must stop the confirmation of Judge Kavanaugh. Donald Trump made a clear campaign promise to only appoint justices who would overturn Roe, and as such, anyone from his list of nominees released during his campaign, including Judge Kavanaugh, is unacceptable,” said Pamela Merritt, co-founder and co-director of Reproaction. “Reproaction is proud to stand with dozens of progressive organizations and activists nationwide in the Unite for Justice National Day of Action on August 26, and we are organizing in Missouri to remind Senators McCaskill and Blunt that their constituents expect them to reject Trump’s regressive agenda and vote no on Kavanaugh.”

“Judge Kavanaugh’s nomination is the latest front in the GOP’s war on health care, and once again Missourians are having to fight back to protect their care,” said Tom Bastian, spokesperson for Protect Our Care Missouri. “This weekend, Missourians demand to be heard by their elected officials. With more than 2.5 million Missourians depending on the life-saving consumer protections of the ACA, we call on both Senators to reject Trump’s SCOTUS nominee.”

“Brett Kavanaugh’s views on guns are no secret,” said Brian Wingbermuehle of Students Demand Action. “It would be a mistake for Senator McCaskill and Senator Blunt to vote to confirm him. The NRA is running a 7-figure ad campaign in support of the nominee, who once equated a ban on assault weapons to a ban of free speech. It is crucial we put a stop to him for the safety of our children.”

“Kavanaugh is nothing more than a rubber stamp for Trump and his desire to eradicate the ACA,” said Caprice Nevils, a Care Partner at St. Louis University Hospital and union leader at SEIU Healthcare. “This would have a direct impact on the millions of people with pre-existing conditions who will not be able to find affordable health insurance.”

“For the communities that ArchCity Defenders serves, justice is not simply an abstract concept. Justice is something that eludes thousands of poor people and black people in this region in a way that exacerbates poverty, homelessness, and mass incarceration. For those who truly care about marginalized communities, we cannot sit idly by and watch the nation’s highest court move even further in opposition to voting rights, access to healthcare, police accountability, and more,” said Blake Strode of ArchCity Defenders.

“These troubled times call for a balanced moral voice from the highest court of our land. We must be able to trust the Supreme Court to discern the law for all the people, to make decisions that protect the most vulnerable and guard the civil liberties of us all,” said Rabbi Daniel Bogard, Central Reform Congregation. “We need justices who will uphold the First Amendment for all and not just for some. We need justices who will protect the freedoms of religious practice and not use their decisions as a bully pulpit for their own personal beliefs. We need justices who will listen to and learn from each other as they take the challenges of growing our democracy that arise with modernity. Judge Kavanaugh’s long record demonstrates a partisan past that will not serve us all. We the people call upon our representatives to reject this nominee who will cause more suffering to those he has proven he cannot represent.”

“It has been my honor to take care of women in their families regardless of their circumstances, but it has become harder and harder to provide care thanks to overzealous legislators passing restrictions that do not protect or promote women’s health,” said Dr. David Eisenberg, medical director of Planned Parenthood of the St. Louis Region and Southwest Missouri since 2009, and a practicing OBGYN for 15 years. “Senators McCaskill and Blunt can protect women and their access to care by voting against any Supreme Court nominee who doesn’t stand up for women and stand up for Roe.”

“The Supreme Court adopted this administration’s hostility toward immigrants when it affirmed the Muslim ban,” Javad Khazaeli, a former ICE prosecutor and co-founder of St. Louis law firm Khazaeli Wyrsch LLC. “If appointed, Judge Kavanaugh would no doubt affirm Donald Trump’s continued marginalization and dehumanization of immigrants, whether they are currently in status or not.”

“From the persistent gender pay gap to workplace policies that don’t support mothers to lack of public funding for abortion, women already face too many obstacles to full equality in our country,” said LaDonna Appelbaum, a breast cancer survivor. “Adding Brett Kavanaugh to the Supreme Court will make life worse for American women, putting their healthcare and their reproductive rights–both fundamental linchpins of economic security and opportunity–at risk.”

“This Supreme Court nomination will shape the state of the voting rights for years to come. With an administration intent on limiting access to the ballot, and key voting rights challenges ahead, it will fall on the High Court to uphold Equality Under Law or risk leaving millions as second-class citizens,” said Denise Lieberman, Senior Attorney and Co-Program Director, Power & Democracy, at Advancement Project. “The wrong appointment risks moving us closer to when the courts allowed Jim Crow to rule the land.”

The St. Louis Unite for Justice Rally is one of over 200 events registered across every state in the country on the August 26th Day of Action.