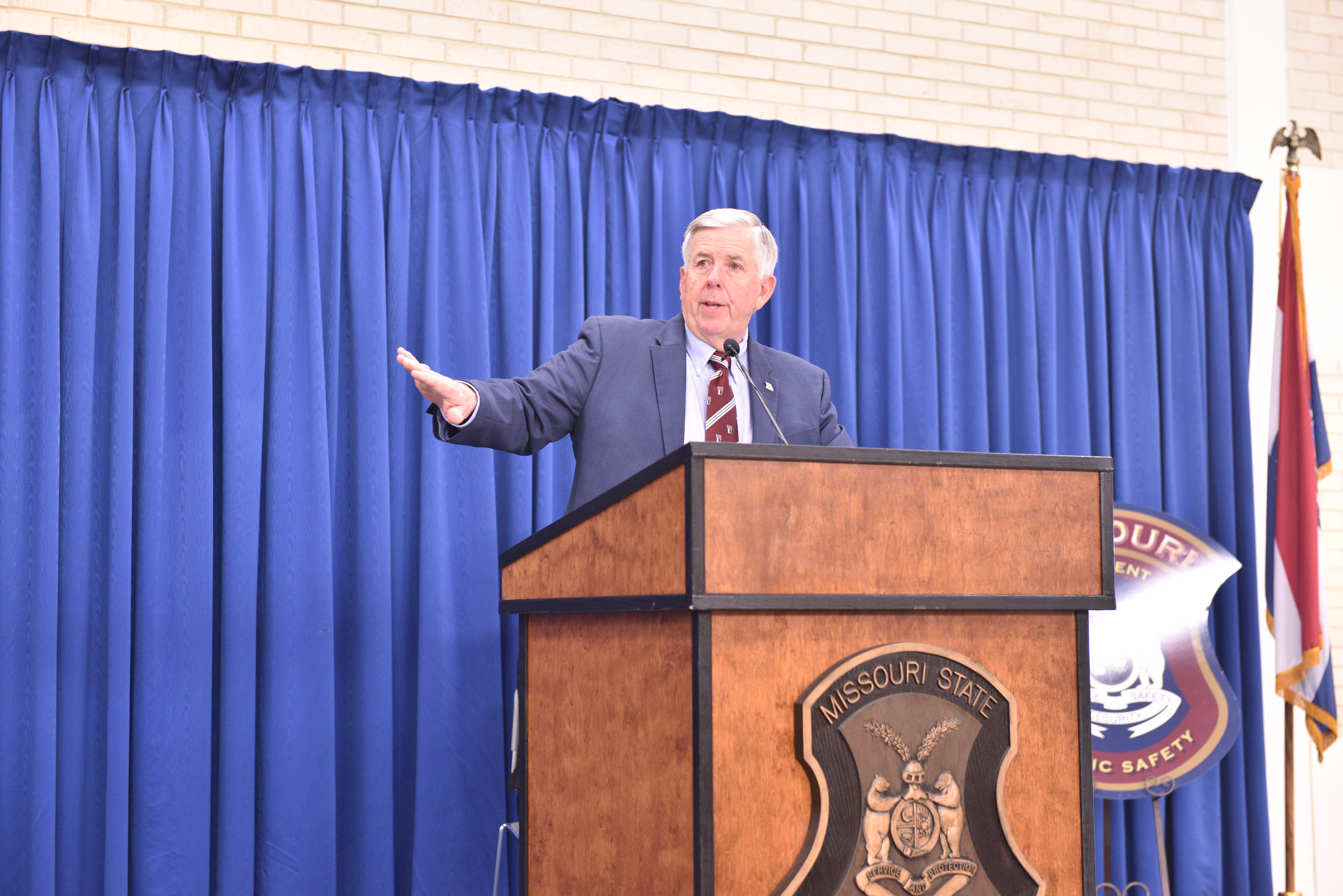 Dedicating the day as Missouri Public Safety Recognition Day, Parson awarded a total of 33 awards in St. Louis to recognize the acts of bravery and public service of first responders across the state.

“The public safety responders we honored today are more than role models,” Parson said. “They represent the best among us.”

Family members and the responders’ colleagues were on hand for the awards presentation at Harris-Stowe State University for the acts performed in 2017.

“They raced into burning buildings to rescue people trapped by fire, heroically ended the threat posed by a gunman, despite being wounded and trapped inside a residence with him, and they worked to innovate in policing to make communities safer and bridge divides between police and the public,” Parson said. “In addition, a civilian honored today selflessly accompanied a firefighter in a life-saving rescue from a burning building.”

The award recipients and the acts for which they were honored are as follows:

Medal of Valor
Missouri’s highest award recognizing public safety officers who exhibit exceptional courage, extraordinary decisiveness and presence of mind, and unusual swiftness of action, regardless of his or her personal safety, in the attempt to save or protect human life.

David Watkins, Jr., Mississippi County Sheriff’s Office – On March 10, 2017, a team from the Mississippi County Sheriff’s Office was serving a search warrant to a convicted felon suspected of narcotics trafficking at a second-story apartment in Wyatt, Mo. Lieutenant Watkins had the lead as the team announced their presence and breached the apartment door. Lieutenant Watkins entered the front door and immediately took fire from the suspect. Other members of the entry team were forced to take cover on the ground outside. Shot in the left leg, and trapped in the apartment with the gunman, Lieutenant Watkins crawled into a nearby room. Unable to stand, he sat against a wall. Outside, his team called for Lieutenant Watkins. Watkins did not answer so as not to reveal his position to the gunman. The gunman, still armed with an AR-15, walked to the front door, where officers were taking cover, and looked outside. He then turned and saw Lieutenant Watkins and began raising his weapon. Lieutenant Watkins fired his weapon striking the gunman in the upper torso, ending the threat to him and the other officers. Watkins then staggered to his feet and held the gunman at gunpoint until his team members took control of the scene. While under fire and while wounded, Lieutenant Watkins demonstrated incredible courage while trapped inside an apartment with a gunman.

Leon Whitener III, St. Louis Fire Department – On April 22, 2017, a call went out for a structure fire with a person trapped in St. Louis’s Botanical Heights neighborhood. The closest fire station was responding to an earlier reported fire, so there would be a delay in the first company’s arrival. Captain Whitener, who was off-duty, immediately responded. He found thick gray smoke pouring out of the two-story residential building. Residents outside the building told him a wheelchair-bound tenant was trapped on the second floor. Captain Whitener charged into the building and up the stairs without any protective equipment. He was followed by a tenant from another unit in the building, Raymond Rayford. The smoke was filling the hallway. Smoke billowed into the room where they found the woman in her wheelchair. She futilely covered her face to try to block out the smoke. Captain Whitener knew time was short because the smoke was building pressure in the room. They pushed the wheelchair to the apartment doorway but furniture blocked the exit. Mr. Rayford threw the furniture out of the apartment to clear a path. Whitener and Rayford then hoisted the wheelchair over the stair railing and down the stair, careful to protect the woman. Once outside, they heard glass shattering. The fire had grown tremendously and was now venting itself out of the room from which they had just rescued the woman. Captain Whitener’s swift and decisive action while off-duty resulted in the rescue of an elderly disabled woman who could not have survived on her own.

Public Safety Civilian Partnership Award
Awarded to a civilian who has provided valuable or courageous assistance to members of a Missouri public safety agency in an emergency situation.

Raymond Rayford, nominated by the St. Louis Fire Department – For his selfless and critical assistance to Captain Whitener in the heroic effort to save the life of a trapped wheelchair-bound woman, Mr. Rayford was awarded the Public Safety Civilian Partnership Award. Though an untrained civilian, Mr. Rayford not only displayed concern for human life and a willingness to help a neighbor but fearlessness and skill during a rescue in which he put his own life at risk.

Director’s Leadership Medal
Awarded at the command or staff level to someone whose demonstrated actions in the areas of community-oriented engagement and collaborative community-based activities have promoted an environment of greater safety, security and cooperation for community members.

Frank Mininni, Normandy Police Department, Chief of Police – Colonel Mininni became Normandy Police chief in 2009, after serving 22 years with the department and steadily rising through the ranks. His two decades of experience made him aware of the gulf that existed between law enforcement and many residents in the north St. Louis County community. Determined to get his officers out of their police “bubble,” a month after becoming chief, Mininni introduced the Normandy Area Policing Initiative. It is a community engagement program designed to create real relationships between police and residents. The program implanted officers from each of the department’s divisions into specific areas of patrol. As people interacted with police, citizen satisfaction rose in resident surveys conducted by the department. To expand contacts with youth, Colonel Mininni implemented a lunch program that encouraged officers to eat lunch at local schools and engage with students. In 2015, Normandy Police and a partner nonprofit were awarded an $800,000 federal grant to put school resource officers back into the Normandy Schools Collaborative. Through these and other community engagement efforts, Colonel Mininni has worked to break down barriers and develop greater trust between citizens and law enforcement and increase public safety in his community.

Governor’s Medal
Awarded to a group of public safety officers in recognition of acts above and beyond the call of normal duty during a critical incident in which the collective performance of the group was essential to the successful resolution of the incident.

Private Louis Bollasina, Private Paul Clark, Captain Larry Conley, Private Marquis Hayes, Captain Michael Hostetler, Private Joe Johnson, Private Tim Mahnken, Private Patrick O’Brien, Private Patrick Pollihan, Captain Bryan Radley, Private Dave Ray, Private James Reynolds, Private Jeff Ronshausen, Private Dale Schultz, Private Tim Schultz, Battalion Chief Gary Steffens, Private Galen Taylor, Private John Vallero, Captain Joe Waring, EMT Andrew Beasley, Paramedic Daniel Goldfeld, Paramedic Dustin Lammert, EMT Antuan Knox, Paramedic Supervisor Colin McCoy, Paramedic Cameron Morton, EMT Nicholas Spiess, EMT Norman Walker, Paramedic James Wilson and Fire Equipment Dispatcher Angela Williams, St. Louis Fire Department – Shortly before 2:00 am on Jan. 24, 2017, the St. Louis Fire Department was dispatched to a two-story, two family flat in north St. Louis that was on fire with multiple people trapped. Because of the extreme danger, multiple fire and EMS companies were dispatched to the scene, all of them made aware that a quick and coordinated search of the building was essential. On the scene within four minutes, firefighters learned several members of one family, including children, were trapped on the second floor, where the fire was burning. As firefighters climbed the stairs, they located the first victim on the stairs, unconscious and barely breathing. The victim was carried out of the burning building and resuscitated on the front lawn. Fighting high heat, flames and near zero visibility, firefighters conducting a coordinated search would locate another adult and five children on the burning second floor, all of them unconscious and in respiratory arrest. All of the victims were quickly removed from the building and revived. St. Louis Fire Chief Dennis Jenkerson has said that in his 40 years in the fire service he has never seen a more coordinated and heroic search and rescue with such a positive outcome.

“I could not be prouder to stand with these exemplary men and women whose actions truly inspire,” Parson said.