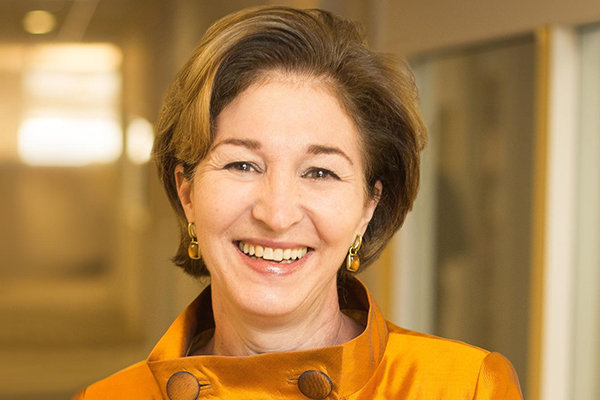 Slaughter also is known for writing a widely read article that sparked a national debate around women’s work-life balance.

Wrighton made the announcement to the Class of 2018 during the annual senior class toast April 5 in the Danforth University Center.

The university’s 157th Commencement ceremony will begin at 8:30 a.m. May 18 in Brookings Quadrangle on the Danforth Campus.

During the ceremony, Slaughter also will receive an honorary doctor of laws degree.

She will address approximately 3,000 members of the Class of 2018 and their friends and family members.

“Anne-Marie Slaughter is an internationally renowned expert and author on issues of foreign policy and national security and identity,” Wrighton said. “I have no doubt that her message to our new graduates and their families will be insightful and inspirational.

“I look forward to hearing her message as an astute observer of the state of America and its future, especially as that relates to our concept of family and the important issue of work-life balance,” Wrighton added. “She has thought deeply and written widely on these concerns, and our graduates will benefit from hearing from her at this key moment of their lives.”

Slaughter is president and CEO of New America, a nonprofit, nonpartisan civic platform dedicated to renewing America in an age of rapid technological and social change.

She is also the Bert G. Kerstetter ’66 University Professor Emerita of Politics and International Affairs at Princeton University, where she has been on the faculty since 2002.

From 2009-11, she served as the first female director of policy planning for the State Department, reporting directly to Secretary of State Hillary Clinton. It was a position she referred to as her “dream job.”

When she accepted the position knowing she would need to be away from her husband and two young boys during the week, she was confident she could juggle the demands of her position in Washington with the responsibilities of her family in Princeton, N.J.

But then life intervened, and parenting needs led her to leave the State Department after her initial two-year commitment and return to an academic career that gave her more family time.

The reactions to her choice to leave Washington because of her children led her to question the feminist narrative she grew up with. Her subsequent 2012 article for The Atlantic, “Why Women Still Can’t Have It All,” quickly became the most-read article in the magazine’s history and sparked intense national debate on the continued obstacles to full male-female equality.

She followed up the article with “Unfinished Business: Women, Men, Work, Family,” which was named one of the best books of 2015 by The Washington Post, The Economist and National Public Radio.

Upon leaving the State Department, Slaughter received its highest honor, the Secretary’s Distinguished Service Award for her work leading the Quadrennial Diplomacy and Development Review, which provided a blueprint for advancing America’s interests in areas such as global security, inclusive economic growth and climate change.

She also received meritorious service awards from the U.S. Agency for International Development and the Supreme Allied Commander for Europe for her State Department work.

Prior to her government service, Slaughter was dean of Princeton’s Woodrow Wilson School of Public and International Affairs from 2002-09 and the J. Sinclair Armstrong Professor of International, Foreign, and Comparative Law at Harvard Law School from 1994-2002.

She was the convener and academic co-chair of the Princeton Project on National Security, a multiyear research project aimed at developing a new, bipartisan national security strategy for the United States.

In addition to “Unfinished Business,” she has written or edited ​seven​ other books, including “The Chessboard and the Web: Strategies of Connection in a Networked World” (2017), which was named by Foreign Affairs as one of the “Best Books of 2017”; “The Idea That Is America: Keeping Faith with Our Values in a Dangerous World” (2007); ​and ​“A New World Order” (2004). She is also the author of more than 100 scholarly articles.

Slaughter is a contributing editor to the Financial Times and writes a bimonthly column for Project Syndicate. She provides frequent commentary for both mainstream and new media and curates foreign policy news for over 140,000 Twitter followers.

A fellow of the American Academy of Arts and Sciences and member of the American Philosophical Society, Slaughter was on Foreign Policy magazine’s annual list of the Top 100 Global Thinkers for four consecutive years.

A native of Charlottesville, Va., she earned a bachelor’s degree from Princeton University in 1980 and master’s (1982) and doctorate degrees (1992) in international relations from Oxford University, where she was a Princeton Daniel M. Sachs Scholar.

She earned a juris doctorate from Harvard Law School in 1985.

Slaughter and her husband, Andrew Moravcsik, professor of politics and international affairs and director of the European Union Program at Princeton, live in Princeton with their sons, Edward and Alexander.