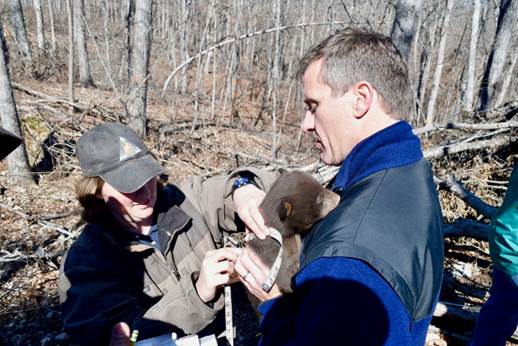 “Ever watch someone walk right up to a 280 lb. Mama Black Bear guarding her cubs? I saw it today. Pretty crazy. Pretty cool. Awesome to see the work of our brave, thoughtful Department of Conservation scientists.

To govern well, you can’t be behind a desk all day. You have to be out with the people you represent, and the workers on the front lines serving Missourians. So, that’s what we’ve been doing.

We went to Howell County today to spend the morning with state workers on the Black Bear Project. They track and research bears across Missouri to keep the population steady, and to make sure that they don’t cause a nuisance or danger.

The scientists collected data, and checked on the health of the sow and cubs; impressive to experience the majesty of Missouri’s wildlife and the dedication of your Conservation team.”

Black bears are an important resource in Missouri for their value as a game species and their contributions to regional biodiversity and ecosystem health. However, bears may also be regarded as a nuisance by the general public. Therefore, it is imperative to have management strategies in place to ensure sustainable population levels while minimizing conflicts with humans and assuring public safety. The Missouri Department of Conservation (MDC) has identified regulated hunting as part of its management strategy to maintain a viable black bear population compatible with habitat and human tolerance. Implementation of effective harvest strategies requires sound information on black bear demographics including abundance, sex ratios, population growth rate, and spatial distribution emphasizing resource use across Missouri.

Initial population research, which began in 2010, suggested a 2012 statewide estimated population of just under 300 bears. In order to model statewide bear numbers and estimate population trajectory, MDC began a project to measure reproductive and survival rates of female bears in Missouri. This black bear population model will be used to predict growth and trajectory of Missouri’s black bear population. Current plans are to propose a limited harvest once bear numbers exceed 500 animals. Other research objectives include measuring black bear habitat use and movement patterns, identifying suitable but unoccupied habitat and to delineate travel corridors that link large tracts of suitable bear habitat in the state. Since the initiation of the Missouri black bear research project in 2010 through June 30, 2017, MDC has marked 145 black bears and has deployed collars on over 90 bears. Female bears will be monitored in the winter den to assess cub production, cub sex ratios and cub survival, in addition to survival, habitat use, and movements. Males will be monitored to assess survival, habitat use, movements, and breeding range.