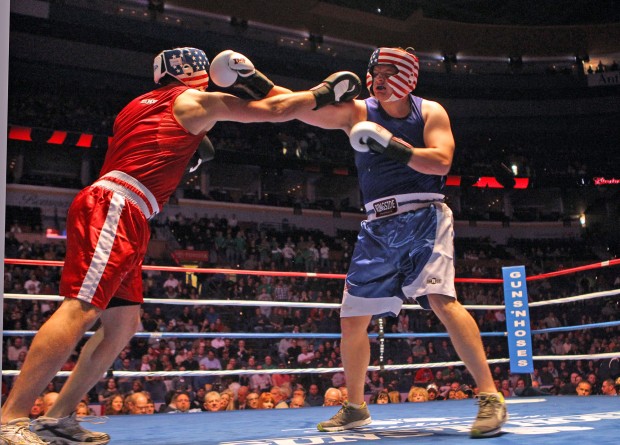 David Gregory, Missouri State Representative for the 96th District (Sunset Hills) and an attorney, has been named an Advisory Member of the Board of Directors of Budweiser Guns ‘N Hoses, the charitable organization that hosts boxing matches between local police officers and firefighters to raise money for The BackStoppers, Inc.

“I am honored and proud to serve as an Advisory Member of the Guns ‘N Hoses Board of Directors, which does so much to assist families and children of fallen first responders in greater St. Louis,” said Gregory, who previously served on the Guns ‘N Hoses Advisory Committee.

In 2016 Guns ‘N Hoses made the biggest donation in its 30-year history, raising $653,000 for The BackStoppers. Since 1987, Guns ‘N Hoses has raised $6.1 million for Backstoppers, which provides financial help to spouses and dependent children of police officers, firefighters, publicly-funded paramedics and EMTs in metro St. Louis who have lost their lives or suffered catastrophic injury while on duty.

Gregory, a Republican, age 32, was elected Missouri State Representative for the 96th District in November 2016 and was named “Legislator of the Year” in the House of Representatives. He currently serves on the House committees for Budget; Judiciary; Special Committee on Small Business; and the Subcommittee on Appropriations-Public Safety, Corrections, Transportation, and Revenue. He is a native of South St. Louis County.

This year’s Guns ‘N Hoses main event is November 22 at Scottrade Center. Starting time is 6:30 p.m. Tickets are $12, $22 and $32. Grey Eagle Distributors and Budweiser have been title sponsors of Guns ‘N Hoses since the event began in 1987. For information about Guns ‘N Hoses see the websitehttp://stlgunsnhoses.com.