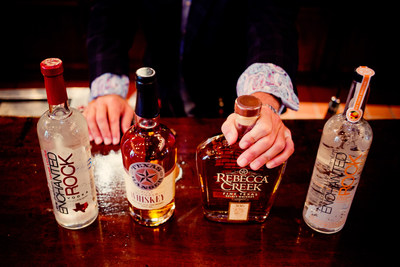 SAN ANTONIO, Nov. 7, 2017 /PRNewswire/ — Texas-based Rebecca Creek Distillery, one of the largest craft distilleries in North America, has released its award-winning spirits throughout the state of Missouri for the first time.

St. Louis-based Major Brands is handling distribution of the distillery’s artisan spirits, which include Rebecca Creek Fine Texas Whiskey, Texas Ranger Whiskey, Enchanted Rock Vodka, and Enchanted Rock Peach Vodka. The distillery’s spirit lineup has received numerous medals and awards, including platinum and gold medals from the SIP Awards International Spirits Competition, double-gold medals in The Fifty Best Spirits Competition, a rating of 93 points from the Ultimate Spirits Challenge, and most recently a silver medal from the International Review of Spirits.

“Getting Rebecca Creek Distillery spirits on shelves in Missouri has definitely been a priority for us for some time,” said Steve Ison, CEO and founder of Rebecca Creek Distillery. “We look forward to sharing our artisan-spirits with quite a few Missourians, and hopefully turn some of them into big fans of our Texas whiskeys and vodkas!”

Founded in 2009, Rebecca Creek Distillery was one of the first legal distilleries inTexas since Prohibition. Its spirits are currently on shelves in eight states, includingTexas, Kansas, Colorado, Louisiana, Oklahoma, New Mexico, Georgia, and nowMissouri. Its case sales have grown exponentially year-over-year since inception, with more than 100,000 annual cases expected to be sold in 2018.

ABOUT REBECCA CREEK DISTILLERY
Founded in 2009 by Steve Ison, Rebecca Creek Distillery was one of the first legal distilleries in South Texas since Prohibition. It has since grown to become one of the largest craft distilleries in North America, with more than 100,000 cases expected to be sold annually by 2018. Its product lineup includes Rebecca Creek Whiskey, Texas Ranger Whiskey, Enchanted Rock Vodka, and Enchanted Rock Peach Vodka. The Distillery offers free tours on Thursdays, Fridays, Saturdays and Sundays, and its tasting room and gift shop are open-to-the-public for group tastings and private events for up to 500 people. For more information on Rebecca Creek Distillery, call (830) 714-4581.