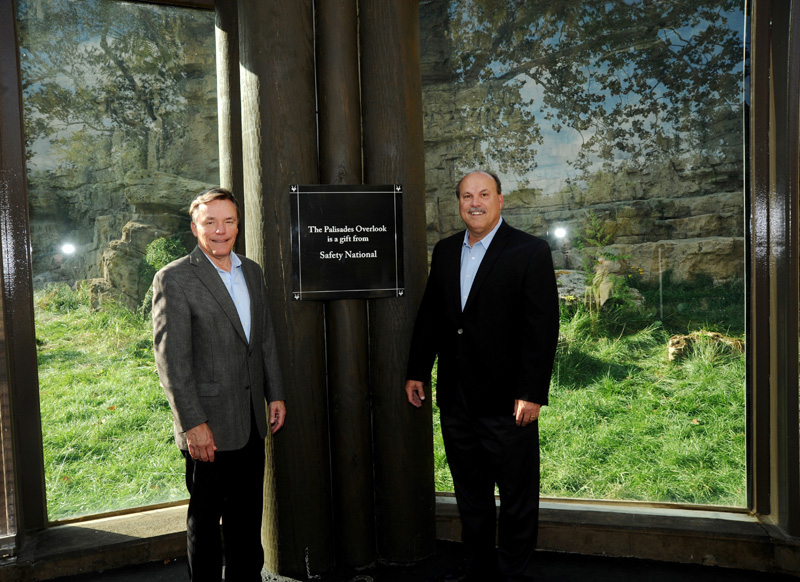 ST. LOUIS (Oct. 5, 2017) – The Saint Louis Zoo has announced a $500,000 gift from Safety National, which is recognized at the Palisades Overlook viewing area of the newly opened Centene Grizzly Ridge. This gift is part of the charitable efforts tied to Safety National’s 75th anniversary in 2017, and is made in honor of its clients, employees and the St. Louis community.

“The Zoo is fortunate to have the support of so many generous St. Louis companies that help us continue to be world-class, and Safety National is no exception,” said Jeffrey P. Bonner, Ph.D., Dana Brown President and CEO, Saint Louis Zoo. “We are extremely grateful for their generosity in supporting the Zoo and Grizzly Ridge.”

In 1942, Safety National was founded in St. Louis out of excess workers’ compensation market instability concerns during World War II. Since then, it has evolved into one of the leading providers of alternative risk funding products in the United States.  In 2012, the Company became a wholly-owned subsidiary of Tokio Marine Group, a top Tokyo-based global insurance group with a presence in over 40 countries. Today, Safety National works with thousands of large businesses nationally. Loyal to its roots, the Company devotes much of its philanthropic efforts to the St. Louis region through gifts of both employee volunteer hours and financial contributions.

Grizzly Ridge opened to the public on Sept. 15, 2017 at the Saint Louis Zoo. The $11.1 million state-of-the-art habitat includes approximately 7,000 square feet of outdoor habitat for grizzly bears, which features a large freshwater wading pool, waterfall and stream, climbing and back-scratching rocks, a variety of substrates (grasses, mulch and sand), and other features to stimulate the bears mentally and physically. The new habitat also has over 3,300 square feet of behind-the-scenes space.

Safety National® is a leading provider of alternative risk funding products such as excess workers’ compensation, deductible casualty, loss portfolio transfers and reinsurance.  Safety National is a member of the Tokio Marine Group and is rated “A+” (Superior), FSC XIV by A.M. Best. Learn more at safetynational.com.