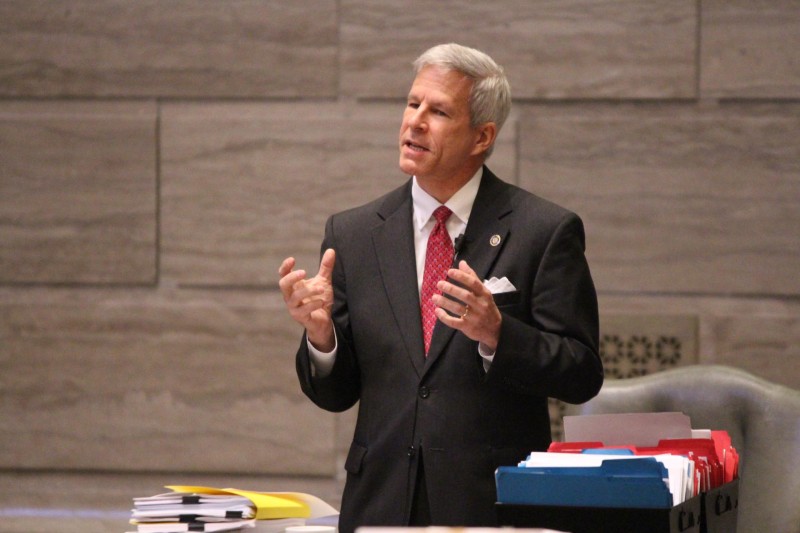 JEFFERSON CITY, Mo. — Sen. Ed Emery has been pushing forward with utility legislation for years now, and the Republican from Lamar is doubling down in his latest attempt.

The senator on Wednesday night presented a substitute version of the so-called “rate-cap bill,” which sought to address some of the issues his fellow senators have discussed, but one provision, in particular, caught the eyes of many across the state.

An amendment to SB 564, would cut electric bills by more than $100 million per year, putting the money back into ratepayers’ pockets “in a matter of weeks,” according to a news release from Emery.

“Because the federal legislation cut the corporate income tax rate from roughly 39 percent to 21 percent, regulated utilities in Missouri will pay less in taxes,” Sen. Emery stated. “This money should go back to customers who are paying utility rates based on the old tax brackets. States with newer, more efficient regulatory models, are able to quickly refund these dollars back to utility customers. In fact, due to grid modernization language passed in Illinois in 2011, utility customers in Illinois will soon see millions in rate cuts.”

A number of states currently have a regulatory mechanism in place to quickly implement similar rate reductions for consumers, but supporters of the bill note that in Missouri, a normal rate case before the Public Service Commission is the only method that could implement such a mechanism, saying it could take up to a year or more to be enacted.

The amendment would give the PSC one-time authority to change rates within 90 days for electric utilities not currently in a rate case. According to Emery’s release, without this amendment, customers may not receive full tax benefits, and any benefits they ultimately receive would be substantially delayed.

However, the same opposition that has appeared every time similar legislation has been produced was once again ready to make a stand. Sens. Rob Schaaf, Doug Libla, and Gary Romine rose to filibuster the bill, with Schaaf and Libla taking the first shots against the bill that night.

“This is the bill that is shamelessly labeled as a rate cap bill,” Schaaf said, claiming that the bill was simply an attempt to enrich utility companies like Ameren. “It’s shameful how this bill has been put to the public.”

“The word around the Capitol is that we are to be broken,” he continued. “This bill is pure special interest to help electric companies. Does anyone believe that Ameren wants a bill that will not make them more money?”

“What happens if we’re right?” Libla asked. “This bill can permanently change how your electricity rates are set… It’s not about grid modernization, it is about bank account maximization.”

The two exchanged comments for more than an hour, questioning how long leadership intended to work on the bill and whether they would resort to the nuclear option of the PQ to perfect the bill. Their House counterparts had already used the PQ in that body twice during the course of the day.

“PQ us and see what the people of Missouri say,” Schaaf responded. “Just do it… or show us the respect of laying the bill over.”

Shortly after 8 p.m., Libla retired after Schaaf called for “Phase 2” of the plan, who then resorted to reading reviews of Tamko shingles.

Libla returned at 9 p.m., two hours after the Senate had taken up the bill for perfection.

Between Schaaf, Libla, and Romine, the three senators took shifts throughout the night, filibustering the bill into the next morning. Shortly before 5 a.m., heading into the 10th hour of the filibuster, Emery offered a new substitute version, only for the opposing senators to pick back up where they left off.

As of 5 a.m. on Thursday morning, the Senate is still in session, and Libla, Romine, and Schaaf’s filibuster continues.

“I just don’t understand why this bill has been allowed to go this long into the night, with daylight coming, but so be it,” Romine said. “I cannot believe the gall of leadership in allowing this bill to continue. They’re destroying the credibility of the chamber right now. This is what they want their legacy to be? So be it. If that’s the way they want to play it, then that’s the way it will be.”

“It seems to me that they have upped the ante,” Schaaf said, stating that he believed a PQ motion was in the works to “get everything” with this one bill. “There will be a price to pay. You’ve seen the Senate blow up before, you’ll see it again.”