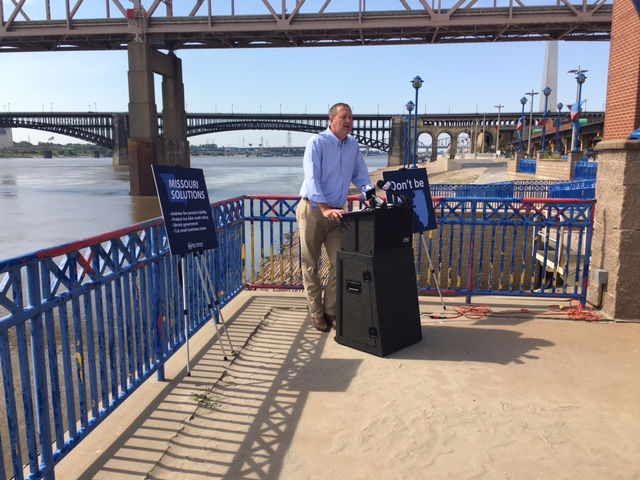 JEFFERSON CITY, Mo. – Missouri State Treasurer Eric Schmitt is calling on the state legislature to address a number of financial issues with one simple message:

In a letter penned to the state’s legislators, Schmitt compared Missouri’s current financial state to that of the neighboring Illinois, noting that recent news out of that state seems to be getting worse each day.

“Decades of government expansion, budgetary neglect, unaddressed pension liabilities, and passing the buck have left the Illinois state budget in shambles,” Schmitt wrote. “The long-term effects of these decisions have now culminated in a crisis so severe that they could become the first state ever downgraded to a “junk” credit rating – a stark contrast to our state’s perfect rating.”

Last week, Illinois put in place a spending plan that would increase taxes by 32 percent to combat their issues of funding. Schmitt said that for a middle-class family in Belleville, it could mean a tax increase next year in the amount of $700 simply because of the “recklessness of state lawmakers.”

Schmitt pointed out that while Missouri is not in the same situation, there are a number of underlying issues that led to Illinois’ issues, which exist on some level in the Show-Me State.

The Republican Treasurer has spoken strongly about the need to address the pension issue, saying that the state’s $15.07 billion total unfunded pension threatens the state’s ability to balance the budget. He says that the state needs to continue working on meaningful reform in order to avoid the cuts to services like those in other states.

He encouraged the legislature to continue budgeting strategically in order to protect the state’s perfect credit rating, which allows lower costs of borrowing. To do that, he said, the focus needs be a long-term view rather than the next fiscal year.

“Decisions made today will impact taxpayers for generations to come, and we must keep that fact in mind with every financial decision we make,” he wrote.

Just last week, Schmitt announced that Missourians would be seeing tax reductions in 2018, and he says that is a step in the right direction on tax policy in the Show-Me State. He says that by providing relief to both businesses and families, it will lead to a strengthened economy and greater financial empowerment.

The final point Schmitt made was to stress the need to make government more efficient. Gov. Eric Greitens has long spoken about his intent to eliminate wasteful spending, and Schmitt says he looks forward to working with him to do so. He says that by shrinking the size of Missouri government, it makes it easier to “keep our fiscal house in order” and maintain their priorities, as well as be more accountable.

“In the wake of our neighboring state’s budget crisis, Missouri finds itself at a crossroads. One path forward requires we start making tough decisions now to ensure our state is one full of opportunity for our children and grandchildren. The other path, the one Illinois foolishly followed to their demise, resembles a pattern of kicking the can down the road until our problems are beyond repair,” Schmitt wrote.

“My word of caution is this: Don’t be like Illinois.”

You can read the full letter below or by clicking here.

6,070 thoughts on “Schmitt urges Missouri Legislature: ‘Don’t be like Illinois’”