Schmitt will not run for U.S. Senate in 2018, paves way for Hawley to run 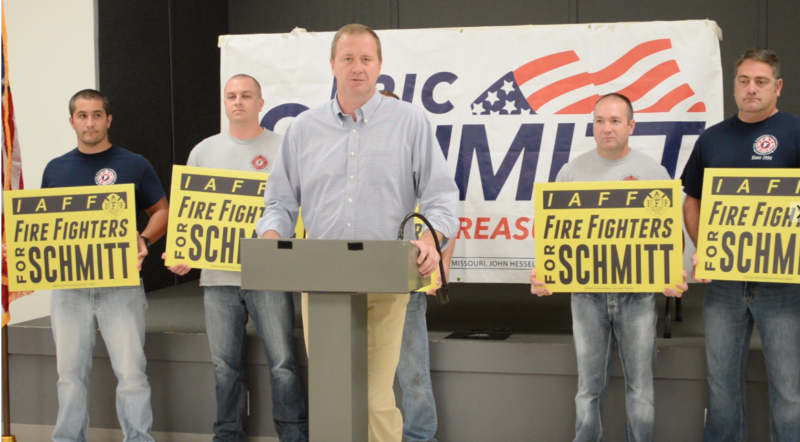 JEFFERSON CITY, Mo. – Missouri State Treasurer Eric Schmitt will not be seeking the Republican nomination to run against U.S. Senator Claire McCaskill in 2018.

Schmitt had been considered a top candidate to enter the Senate race, which is expected to feature a potentially large field of Republican hopefuls looking to unseat the top Democrat in the Show-Me State. The Republican met with top Republican officials in Washington D.C. in July to discuss a potential bid for the U.S. Senate seat, but it was announced on Tuesday Schmitt would be pulling his name and supporting Attorney General Josh Hawley for the nomination.

“I believe it is time for all of us to unite behind one candidate to be the Republican nominee for U.S. Senate, which is why I am supporting Attorney General Josh Hawley. I am encouraging Josh to run for the U.S. Senate and have offered to help his campaign in any way I can if he chooses to challenge Claire McCaskill,” Schmitt said in a statement.

The former state senator said Republicans needed to come together behind one candidate in order to unseat the incumbent Democrat and put conservative leadership in Washington.

“While doing her part to divide the country with hyper-partisan rhetoric and a liberal voting record in Washington, Claire McCaskill still claims to represent Missouri,” he said. “Whether it’s blindly allowing ObamaCare to wreck our health care system with higher costs for Missourians, voting against judges who uphold the U.S.constitution, or hurting our economy with job-crushing taxes and regulations, Claire McCaskill is consistently out-of-touch with Missourians.

“The need for conservative leadership in Washington has never been more clear.  Missouri will be at the center of the debate as national liberal Democrats and Bernie Sanders progressives spend tens of millions of dollars to keep liberal-Claire McCaskill in office.  With stakes this high, it’s imperative that Missouri Republicans unite. I believe the candidate positioned to unite us is Josh Hawley.  He is a smart and innovative conservative and brings real energy to our Party that I am convinced we need to win this race and make the U.S. Senate more responsive to the American people.”

Former Senator Jim Talent applauded Schmitt’s decision, saying it a was the act of a true statesman.

“I’ve thought for a long time that Eric Schmitt is a brilliant conservative who will have a tremendous impact for good in public service,” Talent said. “This act of statesmanship will unify the Party and benefit all the people of Missouri.”

Schmitt’s decision likely opens the door for Hawley to become the favorite candidate. Hawley has been urged to run for the seat by a number of top Republicans, including Vice President Mike Pence.