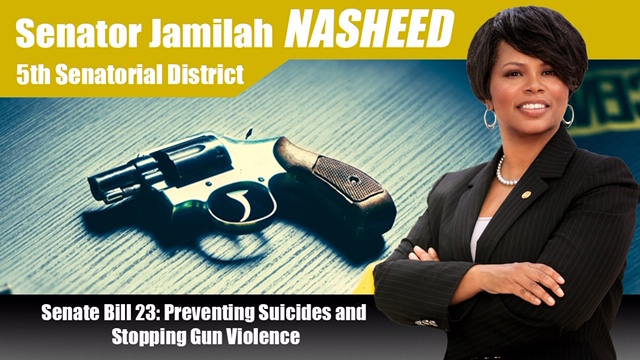 JEFFERSON CITY, Mo. — State Sen. Jamilah Nasheed, D-St. Louis, has proposed a “red flag” bill for the 2019 legislative session. Senate Bill 23 is a gun safety measure that aims to temporarily remove firearms from individuals who are believed to pose a threat to themselves or others.

“As I have said before, gun violence is an epidemic in this country. If we can help reduce it through commonsense solutions, I believe we should,” said Sen. Nasheed. “I believe this measure is a proactive approach to limiting gun violence. If an individual displays signs that they are a threat to the community or to themselves, they should not have access to a firearm.”

The proposed legislation allows a law enforcement officer, family or household member of someone who is believed to pose a danger to themselves or to another individual by use of a firearm to file a petition with the court for a firearms restraining order. If approved by the court, this restraining order prohibits the individual from purchasing, possessing, receiving or having in their custody any firearms for a period of time.

“By intervening before tragedy strikes and removing a firearm from a potentially dangerous situation, we can help reduce the risk for violence and save lives,” said Sen. Nasheed. “Other states like Florida and Illinois have already implemented such laws to help keep their communities safe. I believe with proper vetting from the judicial system, we can help make sure our communities are safe while respecting the constitutional rights of law-abiding citizens.”

“Guns are particularly dangerous when in the possession of people who suffer from uncontrolled mental sickness. While any restriction on gun rights is subject to strict scrutiny, the Missouri General Assembly may enact laws limiting the rights of those adjudicated as a danger to themselves or others as a result of a mental condition,” said Director Edwards. “I thank and applaud the leadership of Sen. Nasheed for her red flag bill that would restrict, regulate and govern via a restraining order, the carrying of a weapon by anyone suffering from a mental condition, because such is narrowly tailored to meet the state’s interest in promoting public safety and preventing violent crime.”

The bill has been referred to the Senate’s Transportation, Infrastructure and Public Safety Committee for further consideration.

For more information on this legislation, please contact Sen. Nasheed’s office at 573-751-4415.