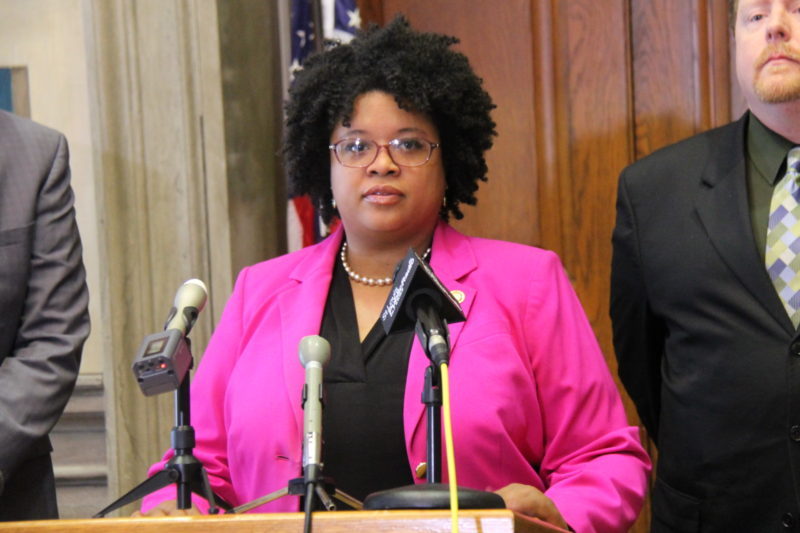 JEFFERSON CITY, Mo. – The Missouri Senate has taken action to discipline the embattled Sen. Maria Chappelle-Nadal, though Republicans failed in their attempt to corral enough votes to expel her, something they had been threatening for weeks.

The Missouri Legislature’s veto session saw little in terms of any attempt to override a veto from Governor Eric Greitens, with no attempted overrides from the Senate, but the true action from the body and the focus of the day was centered on the senator from University City.

Instead of expulsion, the Senate for the first time passed a resolution to censure the state senator for her comment on Facebook, in which Chappelle-Nadal stated she hoped President Donald Trump would be assassinated.

“At a time in our country where there are some rough spots that we’ve experienced, hatred on either side of the debate is not welcome in policy discussions,”Senate Majority Leader Mike Kehoe stated while introducing the resolution. “I would ask my colleagues to consider this resolution and adopt it as it has presented.”

The move, however, does little in effect, other than reprimand the senator in the written word, as she has already been removed from committee assignments.

The Senate failed to enter into the chambers until after 2 p.m., a full two hours after the scheduled time. President Pro Tem Ron Richard stated it was delayed due to their attempts to ensure the correct wording in the resolution’s language.

Republicans acknowledged they did not have the votes necessary to call a special session to expel the senator, but by the careful wording in the last paragraph of the censure resolution, they enabled themselves to take up the issue of expulsion at a later time.

“We had hoped Sen. Chappelle-Nadal would realize the seriousness of her statements, take responsibility for her words, and resign on her own accord,” Sen. Richard said. “However, since that was not the case, the Senate moved for censuring the senator effective immediately. The censure also urges her to resign or face possible expulsion in the future.”

In the end, the resolution passed with a final vote of 28-2, with only the two other African American senators, Sen. Kiki Curls and Sen. Jamilah Nasheed voting against the measure.

Chappelle-Nadal issued the following statement following the passage of the resolution, saying she would not resign.

“Again, I apologize for the Facebook posting.  However, I have made it clear that I will not resign. The voters of my district elected me to represent them.  I will work tirelessly for the remainder of my elected term to bring about positive change for my constituents and all Missourians.”

“Censuring a sitting member has never been done in the history of the Missouri Senate. It is not something the Senate takes lightly,” Sen. Kehoe stated. “If Sen. Chappelle-Nadal was doing the right thing for her constituents, she would have resigned. Demonstrating a disrespect for the democratic process has no place in the Missouri Senate.”

For Lieutenant Governor Mike Parson, censure was not enough.

“Today was a sad day for the State of Missouri. I am very disappointed in the outcome of today’s proceedings. The failure today of several members of the Missouri Senate not to take a vote on critical issues sets a dangerous precedent and a terrible example for future Missourians,” he said in a statement Wednesday afternoon. “Obviously, we are frustrated with some members of the Missouri Senate’s decision to let Senator Maria Chappelle-Nadal retain her seat. Make no mistake; this does not change my position that the Senator’s actions are inexcusable. I totally disagree with these Senators’ poor choice to let her remain in the Senate.”

It remains to be seen if expulsion could still await the state senator, but if that is the case, then the Senate, it seems, will wait until a time when a session is called for them, and the votes are more readily available.