Senators discuss impeachment on chamber floor, Richard says Senate ‘won’t get in the middle of an ongoing investigation’ 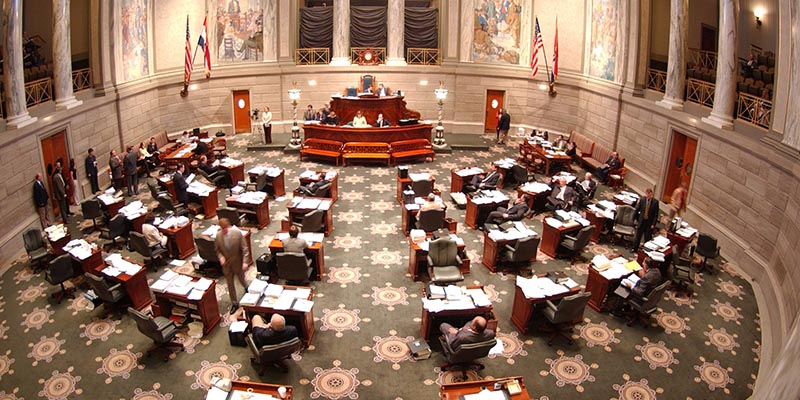 JEFFERSON CITY, Mo. – Members of the Missouri Senate are sending a message to the state’s House of Representatives, and to Republican Governor Eric Greitens as well.

What that message might be is open to interpretation, but it simply seems to be:

“We want to see this dealt with.”

Arriving on the Senate floor on Thursday morning, Sens. Gary Romine and Doug Libla began a conversational exchange on the floor concerning the recent allegations of blackmail against the embattled governor, discussing the fact that the Attorney General’s office attorney representing Greitens in the matter is also representing him in the ongoing matters of the Confide investigation as well as the recent allegations.

The two men spoke of the impeachment process works, a rarity on the Senate floor, perhaps even more so when factored in that it concerns a governor of the same party as those senators discussing the matter.

“We need the House to be able to step up and begin the proceedings that are necessary to shed light on all these fires that are burning,” Sen. Gary Romine said.

Sen. Bob Dixon rose for an inquiry, as his colleagues sought to ask him about his knowledge of the steps, as he had done some research in the matter.

“I can’t give you a legal opinion, but I can give you my own opinion,” Dixon said. “Process is paramount. And if we follow the process, despite the policy, we stay out of trouble.”

He pointed to the state constitution, noting that the process, of course, places the sole power of impeachment with the Missouri House, while the Senate is placed in the “very unique and arduous place of selecting the jury.”

According to statute (106.080 RSMo):
“If the governor or a judge of the supreme court shall be impeached, the house of representatives shall immediately transmit such articles of impeachment to the senate who shall, without delay, proceed to the election of a special commission to try the cause, which commission shall be composed of seven eminent jurists, who at the time of their election are judges of the circuit or appellate courts of this state; provided, however, that judges of the supreme court shall not be eligible to serve on such special commission. The commission shall meet in the City of Jefferson within thirty days after their election on a day designated by the senate.”

Dixon urged the members to caution, saying it was best not to comment on any ongoing investigation, and that with such a duty, he thought it best to remain impartial.

When asked if the Senate would open an investigation into the Governor, Senate President Pro Tem Ron Richard promptly replied that “we’re not going to do that.”

“We’re going to wait until the St. Louis judge and prosecuting attorneys do their things,” he said. “That’s the proper thing. We’re not going to get in the middle of an ongoing investigation.”

5,127 thoughts on “Senators discuss impeachment on chamber floor, Richard says Senate ‘won’t get in the middle of an ongoing investigation’”