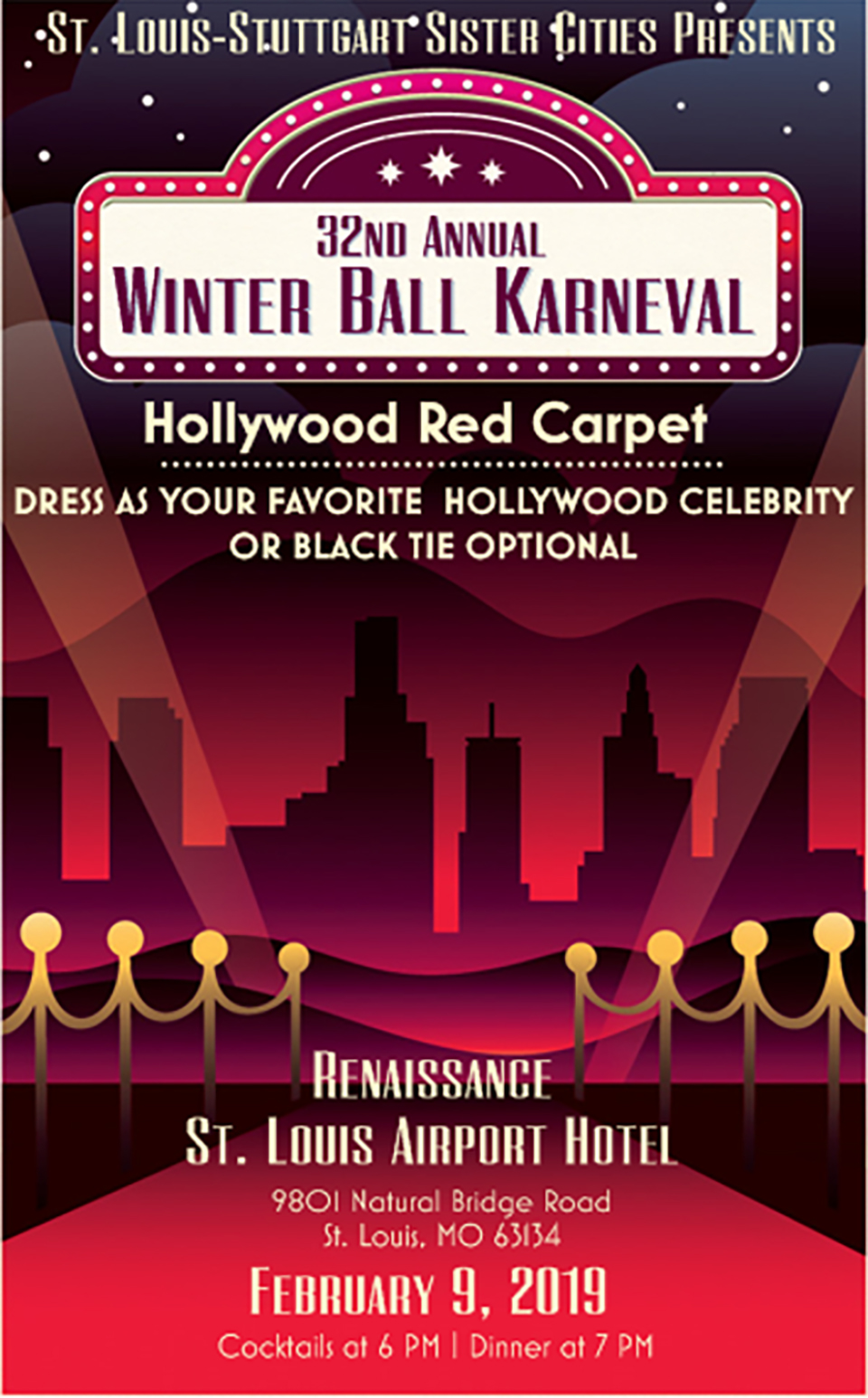 The annual karneval is a major fundraiser event for SLSSC that brings members, guests, patrons and corporate sponsors together for a “fun-filled” night, in the spirit of Mardi Gras season and in true German fashion. The Winter Ball Committee has planned a “Hooray for Hollywood” experience for those who attend this year’s event which is anticipated to draw nearly 400 guests.

The evening’s festivities will begin with cocktails at 6:00 pm and will include a 3-course dinner, live music by Übercool, a raffle and silent auction and more. SLSSC encourages its guests to dress as their favorite Hollywood celebrity, black tie optional.

Following the conclusion of the Winter Ball will be a ticketed After Party from 11:30 pm to 2:00 am at the Renaissance St. Louis Airport Hotel. The After Party will have German food and Gemütlichkelt, German beer and wine and live entertainment from the SLSSC band.

The annual Winter Ball fundraiser helps to foster business, education and cultural changes between the cities. According to a new release, the SLSSC has been made up of German natives, business executives, former students, Americans that have visited Germany before and for the love of German culture.

Funds raised through the Winter Ball Karneval support the organization’s cultural, educational and business/trade events and programming for both the members and the general public. Activities include student exchanges; scholarships and educational grants which enable high school and college students, educators and business interns to study abroad.

Vukovic and Evens will serve as the event’s Co-Emcees on Saturday, February 9th.

Tickets to the 32nd Annual Winter Ball Karneval “Hollywood Red Carpet” are $85 per person, including complimentary parking and breakfast the next morning. The After Party tickets are $25 per person. Tickets can be purchased online at stl4stuttgart.com or by contacting Harrison Billy at 314-609-6734.

SLSSC is looking for sponsorships at various levels from $350 up to $2,000. For sponsorship details, contact Susanne Evens at sevens@aaatranslation.com or 636-530-1010. Current sponsors of the Winter Ball include The Missouri Humanities Council, Autohaus BMW, Urban Chestnut and AAA Translation.

SLSSC is also looking for donations for the event’s silent auction. Those interested in providing a donation should contact Auction Chair Wilma Prifti at wprifti@att.net or 314-825-0389.

More information about sponsorships and donations for the 32nd Annual Winter Ball Karneval “Hollywood Red Carpet” can by found by contacting the SLSSC organization at 636-530-1010 or sevens@aaatranslation.com. Additional details can also be found at the SLSSC website, stl4stuttgart.com.