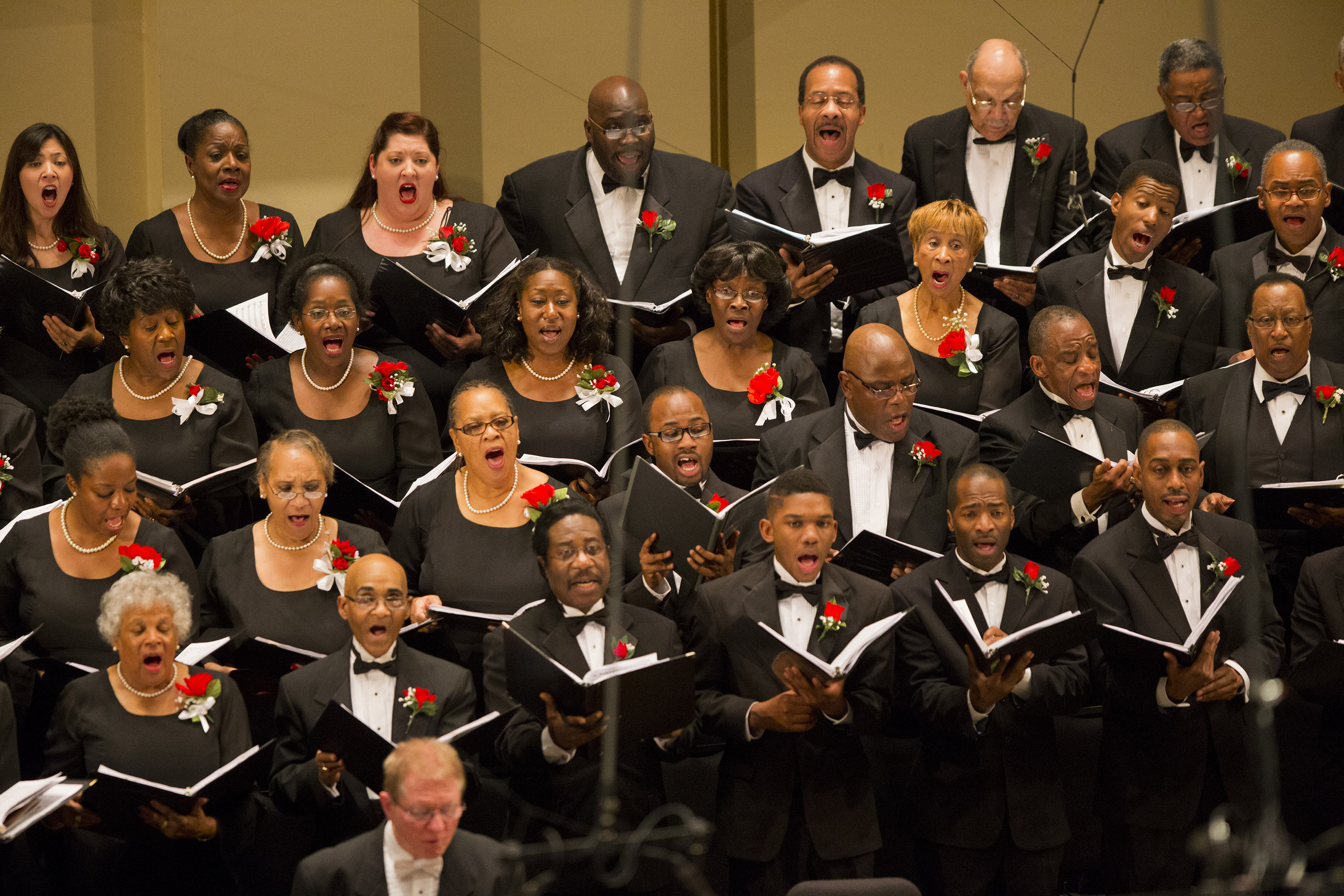 ST. LOUIS, Mo. – This season, the St. Louis Symphony Orchestra commemorates the 25th anniversary of its IN UNISON Chorus.

The chorus, specializing in the performance and preservation of music with African and African-American origins, is marking is 25th year with performances including A Gospel Christmas on Dec. 20th, Lift Every Voice on Feb. 22, 2019 and its annual free community concert on May 3, 2019.

Over the past 25 years, IN UNISON Chorus has performed with the SLSO, which is the only American orchestra to have two resident adult choruses, and local churches throughout the region singing to thousands of people.

“The brilliant IN UNISON Chorus has become an integral part of the SLSO family and the St. Louis Community,” Marie-Héléne Bernard, president and CEO of SLSO said. “Reflecting on and celebrating the region’s history, talent and diversity in a meaningful way, the IN UNISON Chorus is an artistic treasure and stands proudly alongside the SLSO. On behalf of the entire SLSO family, I congratulate Kevin McBeth and each musician of the IN UNISON Chorus on 25 years of music making.”

The St. Louis Symphony IN UNISON Chorus was created in 1994 as part of the IN UNISON program, a Monsanto-supported SLSO outreach program that connects the SLSO with diverse audiences through African-American partner churches in the St. Louis region.

IN UNISON Chorus formed when André Raphel Smith, assistant conductor of the SLSO in the early 1990s, programmed Hannibal Peterson’s African Portraits for an SLSO concert. The jazz/classical opera tracing the history of African-Americans called for a choir to sing partly in the Mende language of West Africa.

Smith asked Robert Ray, a University of Missouri-St. Louis music educator, to convene a chorus capable of the performance. Ray gathered singers from IN UNISON partner churches for the SLSO premiere of African Portraits on January 22, 1995. Reaction to the IN UNISON Chorus was overwhelmingly positive, and it was made a permanent part of the SLSO family.

“When the IN UNISON Chorus was formed, it was never intended to be an ongoing part of the St. Louis Symphony Orchestra,” Kevin McBeth, director of IN UNISON Chorus said. “The chorus formed in 1994 to sing for one special concert, but it was such a success, they continued singing – and with the full embrace of the SLSO. The early years were spent designing a profile for a chorus specializing in the music of African and African-American cultures since there was no other model in the country.”

Since its debut, IN UNISON Chorus, composed of 125 talented singers from across the St. Louis region, has performed more than 100 times, including twice-yearly performances with the SLSO and a popular free community concert each year. Ray served as the director of the chorus from 1995 to 2010. McBeth has directed the chorus since 2011.

“The IN UNISON Chorus’ visibility in St. Louis has increased significantly in the past 25 years,” McBeth said. “Singing with nationally-recognized artists and the orchestra has become a tradition that brings standing-room-only crowds to the symphony.”

The chorus made its Carnegie Hall debut in 1998. It has also been featured on CBS Sunday Morning, Live at Powell Hall and classical concerts and Summerfest (Classics in the Loop).

“Our music creates a sense of community in Powell Hall, where a person can relax and appreciate others without societal interpretations of who we are,” Gwen Wesley, a charter member of IN UNISON Chorus said. “These experiences carry over into our separate communities, giving us different and, hopefully, more positive images of others.”

Membership to the 120+member IN UNISON Chorus is by audition. Prospective singers do not need to be a member of an IN UNISON partner church to audition. IN UNISON Chorus members come from throughout the ST. Louis metro area, ranging in age from their 20s through seniors.

In 2012, the IN UNISON Young Artists program was started in order to attract younger singers to lend their talents to the chorus.

For the 2018/2019 performances, IN UNISON Chorus will be celebrating their anniversary milestone with three performances.

Additional repertoire will be announced at a later date. This concert is supported by Monsanto Fund.

Repertoire will be announced at a later date. This concert does not feature the St. Louis Symphony Orchestra. Traditionally, the community concert has been held in partner IN UNISON churches throughout the St. Louis area. This year’s performance will be at Powell Hall to accommodate the capacity of crowds in attendance. The concert and free and open to the public. While no tickets are needed, reservations are required at slso.org/freeconcerts.