State Board of Education rendered ineffective with Governor’s re-appointments, so what now? 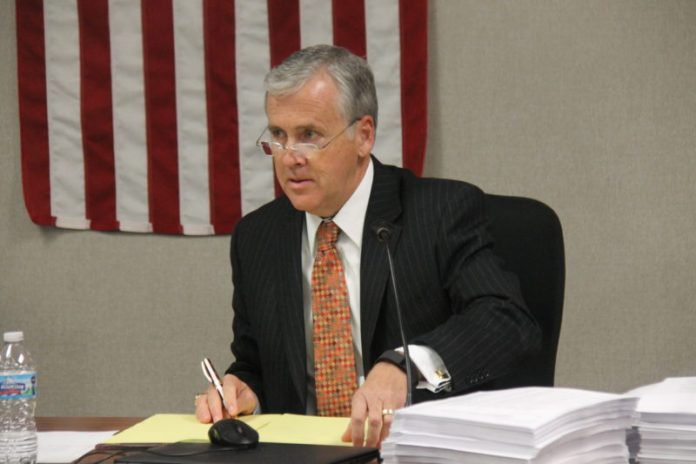 JEFFERSON CITY, Mo. – It’s time to talk about the Board of Education.

It’s a topic that has been on the tongues of many in Missouri state government, thanks to Gov. Eric Greitens’ moves seeking to replace the state commissioner of education.

The saga has been fairly heavily covered by the media outlets in the state, from the beginning to its current status. But this week, with the state legislature returning to the Capitol, the ongoing saga has taken yet another turn.

The Governor’s intent with the procedural maneuver was to buy his appointees more time to be confirmed by the Senate.

Comments from President Ron Richard and Sen. Majority Leader Mike Kehoe were included a press release announcing the Governor’s reappointing of his nominees, stating the following:

“The Governor has nominated a number of high-quality individuals to a variety of departments, boards, and commissions that are now before the Senate for approval,” Kehoe said. “I believe allowing the Senate additional time to weigh in on these very important positions on the State Board of Education was a positive decision by the Governor.”“I know there is a desire among senators to be involved in this process and to give our advice and consent to well-qualified appointees,” Richard said. “Today’s action will free up extra time for the Senate to give prompt consideration to a number of the Governor’s other important interim appointees.”

But during a Wednesday afternoon press availability, Richard’s responses to questions concerning the matter of the appointments boiled down to one sentiment: protecting the right and duty of the Senate at all costs.

“I’ve taken exception to all governors, Republican or Democrat, pushing in on the business of the Senate and the House,” Richard said. “When you have a quasi-independent board, I think that could’ve been handled better. I’d have been more than happy to help him if he had so engaged us.”

When asked about a potential filibuster that several senators have alluded to, Richard said that was assuming he would have a hearing for the appointees and send them out.

“Don’t ever take out my ability to do the business of the Senate,” Richard said. “I’m going to protect the Senate at all costs, and our ability to do our job and do what we do, regardless.

When asked what he would do with the appointees now that they have been resubmitted, Richard simply replied: “I guess you’ll have to wait and see.”

But even if the nominees are given a hearing, they must first receive the approval of the Senate Committee on Gubernatorial Appointments, which is chaired by Richard. From there, it would be up to the Senate to confirm the picks on the chamber floor, which could be more easily said than done.

As stated earlier, some senators have already shared their intent to block the nominees, the most notable of which is Sen. Gary Romine, who chairs the Senate Committee on Education, and Sen. Rob Schaaf, who has been at odds with the Governor since the past legislative session when the Republican governor’s organization, A New Missouri, issued attack ads against him on social media.

While speaking on the floor on the first day of the legislative session, both men once again affirmed their intent to obstruct the path to confirmation for the Governor’s nominees.

Romine said that “in spite of the conversations we have had, the same names were reintroduced later that same day.”

Romine said that the process was carried out in such a way that the Senate was going to have to evaluate the process for all boards.

“A problem has been exposed on the process of appointments for our boards and commissions, and we need to fix the issue so we are not going to see this in the future,” Romine said. “It’s been abused. It’s got to stop.”

The move means that just three of the eight board members are officially active members, but in essence, the five people appointed by the Governor now have no power to make decisions on the board until the Senate confirms them.

“That has now created an environment, so the body knows, that there is not a quorum for the State Board of Education to meet until any confirmations take place,” Romine said.

In short, the board cannot conduct any official business, whether it be with the search for the next commissioner, the renewal of any school charters, accrediting local school districts or establishing requirements for education, testing, and assessment, or even submitting annual budget recommendations to the Missouri Legislature.

Schaaf stated that the Governor had been warned in advance of the repercussions of withdrawing and reappointing the nominees, but said the Governor went ahead and did it anyway.

“When the Governor sends his message to us, which he did in the journal, according to the Constitution of Missouri, if he hadn’t withdrawn those names, we would have had thirty days in which to act. And if we failed to confirm, then they would be forever barred from being in that position,” Schaaf explained. “And the idea here is that the Governor couldn’t just go ahead and appoint them after. But given that he withdrew them, now they are not allowed to act in their official capacity because he withdrew them, they’re no longer on the board. Now that we’re in session, they’re not allowed to act until we confirm them. And now we have until the end of the session to confirm them, and if we don’t do that, then they are forever barred from being on the Board of Education.”

Schaaf further explained that, now that the appointments have been sent to the Senate, the Governor cannot withdraw them. The Senate can send them back, but it requires action from their chamber to do so.

“If we send them back, however, there would be nothing stopping the Governor from reappointing them the day after session,” Schaaf said. “We can’t allow these appointments to go back.”

“These five only came on the Board because they were willing to make a particular vote that the Governor wanted them to make,” Romine said. “To me, that should put them in a position to be denied the opportunity to serve on the state board, which requires critical thinkers and think based on the own facts and values of the particular issue and not be a puppet of the Governor.”

“Right, and they have been proven to be puppets of the Governor, and he has shown that he is willing to remove them when they don’t do his bidding,” Schaaf said.

Following the discussion between Schaaf and Romine, Sen. Jamilah Nasheed rose to inquire of Romine, asking if he was willing to go so far as to block the appointments. Romine replied he was.

“We don’t have a quorum, so the education board is totally shut down,” Nasheed stated.

“They can survive the next five months without a board meeting,” Romine said, noting that the board is only required to meet twice a year.

“What if there’s an emergency? They will not be able to function,” Nasheed asked. “To me, it’s an obstructionist move.”

“I’m not letting something bad pass just to get something done,” Romine responded. “Our contingent is that if we’re going to have a state board, then it’s going to be people who

“Governor, give us five new names to begin working on, and we’ll get on with the process,” Romine said. “This is on the Governor.”

But the timing of this all happening is perhaps the most interesting part: it all arrives just days before a public hearing to get input on the traits they want to see in the next commissioner of education. The following day, Tuesday, Jan. 9, the board was scheduled to meet to narrow the field of applicants, which reportedly only consists of one application at this time, and decide whether to extend the application process or hire a group to conduct a national search.

But without enough members for a quorum, the Department of Elementary and Secondary Education was forced to issue a news release on Thursday, stating that the board meeting has been canceled for that very reason.

The public hearing, however, will still go on as scheduled on Monday, Jan. 8, from 2-5 p.m.

2,122 thoughts on “State Board of Education rendered ineffective with Governor’s re-appointments, so what now?”