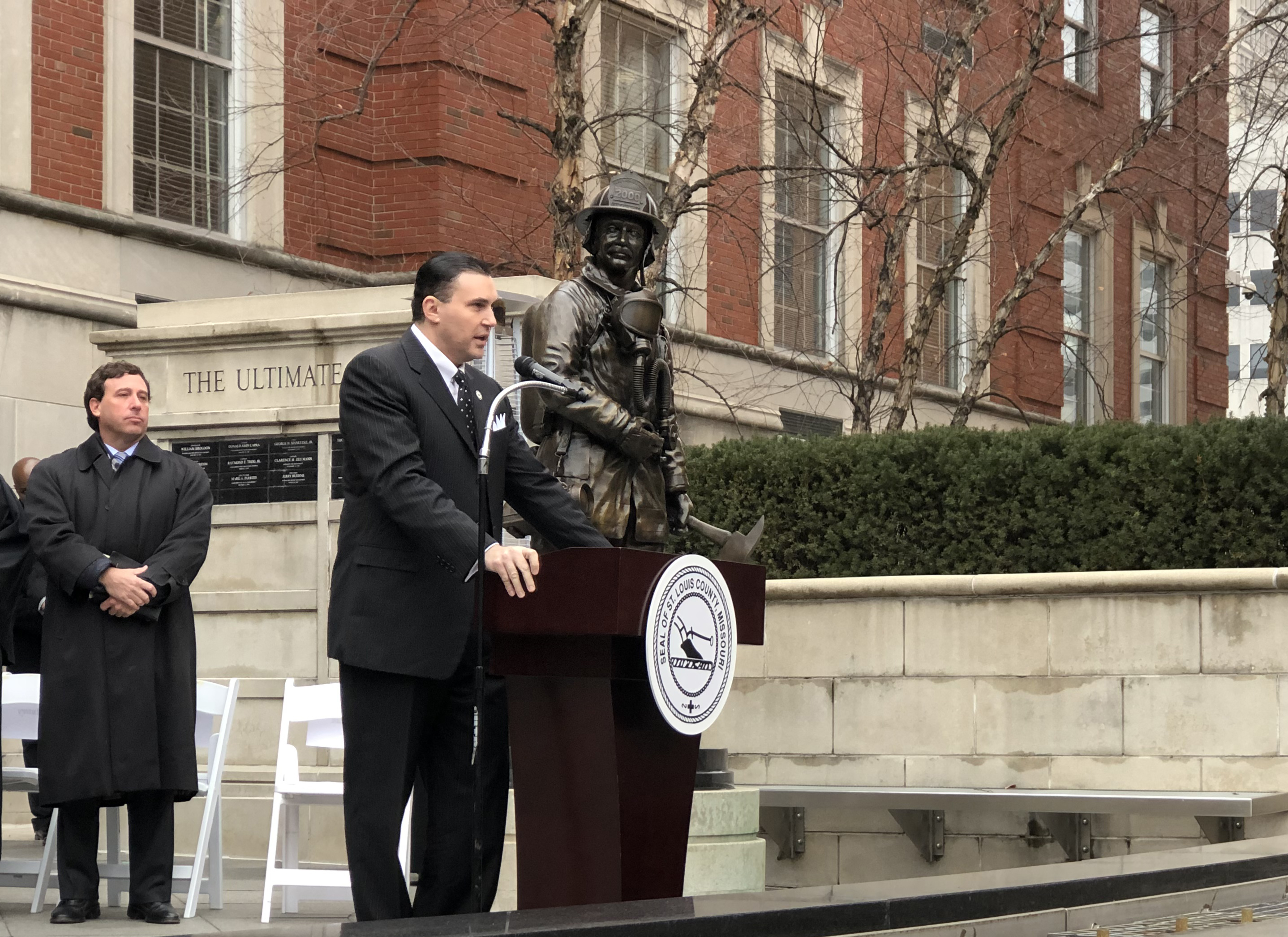 CLAYTON, Mo. – County officials and honorable guests streamed into the Memorial Park Plaza for the swearing in of the newly elected St. Louis County leaders.

Stenger, Democrat, has served as the St. Louis County Executive since 2015. Prior to that, he served as a council member representing the 6th District from 2009 to 2015. He was also chairman of the council in 2011.

After being sworn in by Judge Henry Edward Autrey, Stenger discussed the different items that the St. Louis County Administration has accomplished while he has been in office such as the first-ever forensic audit of the county, leading to millions of dollars in taxpayer savings; an apprenticeship program with United Auto Workers; job and economic growth; the County’s own opioid prevention program, which serves the entire state, and Proposition P Funds, among others.

“Where equity is concerned, meaningful progress cannot be achieved by County Government on its own,” Stenger said. “The only way that we can make true progress is by working together as partners and as a community. To address regional equity, we must begin to think and act as one region.”

Making history, Bell is the first African American County Prosecutor in 207 years of St. Louis County’s history. His oath of office was administered by Judge George Draper, the second African American on the Missouri Supreme Court.

“I’m a St. Louis County boy. This is my home,” Bell said. “When we look at how we move this region forward, it’s the same concept: we can’t do it alone. You want to go fast, go alone. You want to go far, we have to go together…The work doesn’t stop, we’re just getting started. I can’t tell you how humbled I am, how blessed I am, to have such a great group of people standing by me, standing with me, for me. As we move forward together as a county, remember these words, remember this mission, because your voice was heard loudly and clearly.”

Fitch, Republican, was on the St. Louis County Police force for 32 years. He served as the Police Chief from 2009 to 2014. His main priority on the council is public safety for the county. His oath of office was administered by the Honorable Judge Dean Waldemer.

“I look forward to representing everyone in the third district for the County Council,” Fitch said. “Not just the Republicans. Everyone. When you’re elected, I believe you represent everyone in your district, regardless of their party.”

Clancy, Democrat, will be representing the 5th District of St. Louis County. Born and raised in Webster Groves, Mo. she has spent her life serving others and being involved in various organizations such as NARAL Missouri’s Board of Directors and Maplewood Community Builders. Her main priority on the council is equity for the county. Her oath of office was administered by Judge Susan Block.

Being a mother to her two-year-old son, Clancy noted that women face challenges when running for office. She said that she could not be where she is if it was not for the support from her husband – not because he is a man or her husband, but because he is her partner. Clancy was told that it would be a long shot for her to win, but she listened to her friends, family and neighbors and ran anyway.

“What I’ve heard for so long, before my campaign and during, is that we as St. Louisans have big dreams for each other and for our future,” Clancy said. “And yet, too many of those dreams won’t be realized until we embrace our collective capacity to do and be better…I believe in us, our community and our region. I know our best days are ahead of us because we will put our hearts and our minds to it.”

Harder, Republican, will be serving his second term in representing the 7th District. Prior to serving as Councilman, Harder was a Ballwin Alderman from 2011 to 2014. His oath of office was administered by recently retired Judge Douglas Beach.

“There is nothing we can’t accomplish together,” Harder said.