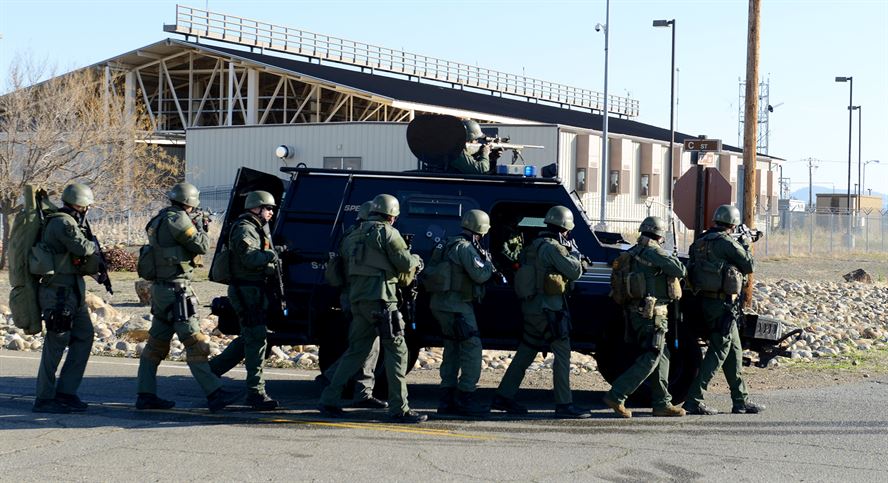 A gunman opened fire on law enforcement officers serving an arrest warrant inside a home Monday morning, hitting a deputy U.S. marshal before he was shot to death by police, authorities said.

The marshal, who has been released from a local hospital, survived the gunshot thanks to his bullet-resistant vest, police said.

At approximately 10 a.m., the U.S. Marshals Service Fugitive Task Force responded to a residence in the 10300 block of Durness Drive in Glasgow Village to locate and arrest a fugitive with a felony warrant for domestic assault.

The subject was also wanted for questioning in relation to assault (a shooting). In that shooting, a 31-year-old man was shot in the side of the head near Stimson Drive and Chambers Road. The victim survived.

As officers approached the residence, the subject was observed outside on the property and was wearing body armor that said “Police”. He began to shoot at members of the Fugitive Task Force and hit one officer.

Members of the Fugitive Task Force returned fire at the suspect, while retreating to provide aid to the officer. The suspect moved out of view and officers formed a perimeter around the area.

The U.S. Marshals Service also requested the assistance of the St. Louis County Police Department’s SWAT Team with the armed and barricaded suspect.

The tactical team approached the property around noon and found Watson dead in the area of the carport. A gun was found, but it was not immediately clear what kind.

The officer who was shot is a 32-year-old male, who has ten years of law enforcement experience with the St. Charles County Police Department, and has been detached to the US Marshals Service for approximately one year. He also returned fire.

Another officer who returned fire is a 44-year-old male, who has 23 years of law enforcement experience with the St. Louis County Police Department, and has been detached to the US Marshals Service for approximately 6 years.

As the Tactical Operations Unit cleared the scene, the suspect was located and pronounced deceased at approximately 4:30 p.m. He is identified as William Watson, 40, of the 10300 block of Durness Drive in St. Louis.

The St. Louis County Police Department’s Bureau of Crimes Against Persons is leading the investigation, which remains active at this time.