Under oath, Faughn answers committee questions, reiterates the money was his 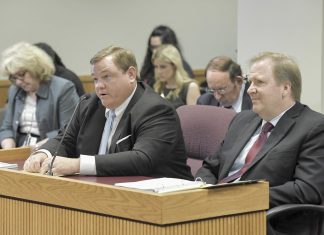 JEFFERSON CITY, Mo. — “It was my money,” Scott Faughn testified under oath to the House investigative committee. Al Watkins has previously said he thought the money came from an out-of-state Republican donor.

After the hearing, which lasted more than three hours, Ed Dowd, Gov. Eric Greitens personal attorney, questioned the reliability of both individuals and stated he does not believe Faughn is the source of the money.

Faughn is the publisher of The Missouri Times and host of This Week in Missouri Politics. Watkins is the attorney for the ex-husband of the woman who had an affair with Greitens in 2015. The woman has not been named publically, only being referred to as K.S. or Witness 1.

During the hearing, Rep. Don Phillips, the Special Investigative Committee on Oversight’s vice-chairman, asked Faughn a series of questions on his involvement with different allegations against the embattled governor.

“Did you have anything to do with helping create Witness 1’s story?” Phillips asked.

“Not at all,” Faughn answered.

“You weren’t of any assistance in staging the scene in that car were her statement was taken that ultimately resulted in the recording?” Phillips asked.

“You certainly weren’t in the car on March 25?” Phillips asked.

“Did you make any kind of payment to Witness 1?” Phillips asked.

“To the best of your knowledge, has Witness 1 every received any kind of payment?” Phillips asked.

“Not to my knowledge,” Faughn answered.

“Did you create any of the following documents provided to this committee over the course of this investigation,” Phillips said. “The Mission Continues list?”

“Emails about campaign news from The Mission Continues?”

“The Missouri Ethics Commission report naming Danny Laub as the person who gave the list to the campaign?”

“Krystal Taylor’s testimony that Eric Greitens directed her to send the TMC list to political operatives for fundraising purposes?”

“This witness was here so that this committee and everybody in this state where did this money, the $120,00, come from,” said Dowd in an impromptu press conference after the hearing. He doesn’t feel that the question was adequately answered.

At play is $120,000 delivered to Watkins between January and February. The money has made headlines in recent weeks since being revealed by Watkins.

“…there’s a lot of incredulity on the front end and back end of the story,” Rep. Jay Barnes, the committee chairman, told Faughn.

“This was my money,” Faughn said repeatedly to the committee. The question kept coming up because, on the advice of his attorney Chuck Hatfield, he refused to get into the inner workings of his business to discuss how he had that amount of money.

Of the $120,000 delivered to Watkins in cash, $100,000 was for the purchasing of the recordings and $20,000 was for retaining Watkins as an attorney, Faughn testified. The payments were made in three or four deliveries, all — except for one which was made by “someone in my Clayton office” — were made by Faughn.

Faughn had heard that Watkins was in possession of recordings that proved the rumors of Greitens having an extramarital affair were true and reached out for the recordings. According to Faughn, the recordings were going to be used for a book he is writing. The book is anticipated to be published this fall.

He approached Watkins for the recordings and after several meetings — that totaled roughly four hours — came to an agreement.  Faughn said he’d never done anything like that before.

“Al Watkins is a nice guy that I like. Al Watkins is an east coast guy, Georgetown-educated St. Louis attorney, who whenever I’ve spoken to him is in tailored suits. I’m a hillbilly from West Butler County who went to SEMO proudly who talked to him in jeans and a Carhartt,” said Faughn. “It is fair to say, under oath, that Al Watkins doesn’t speak hillbilly and hillbillies have a hard time speaking to Al Watkins.”

There was no paperwork, texts, emails, or anything written down in relation to the purchasing recordings — it was agreed with a handshake, Faughn said. Faughn did say he signed a letter of engagement.

The committee had a hard time believing that the cash originated with a person who has had financial-related lawsuits brought against him in the past. They also questioned why someone would have that much cash and if cash was used to conceal the origins of the funds.

Faughn consistently reiterated that is was his money that he used to pay for the tapes but won’t go into personal business dealings.

Greitens’ defense is alleging that the cash payments are what triggered P.S., the woman’s ex-husband, to go on-the-record.

The Missouri Times did not break the story or use the recordings in any news story.

Dowd alleges that the money originated with entities upset with Greitens ending the Low Income Housing Tax Credit. The specific tax credit was not reauthorized by the legislature this year.

Greim wants Faughn to submit bank records and phone records in order to get to the bottom of the issue. During the hearing, Hatfield had pointed out that Greitens hasn’t released his tax returns or any information related to his business dealings.

“The committee is doing good work and should be looking to see whether any witness was influenced to give incorrect testimony. It is clear that never happened. The witnesses in this case are very credible,” Hatfield said in a statement after the hearing. “So far the only evidence that a witness was asked to alter their testimony is the revelation that a lawyer for the governor asked the victim to deny an affair. The governor knew such a denial would have been untrue.”

3,007 thoughts on “Under oath, Faughn answers committee questions, reiterates the money was his”