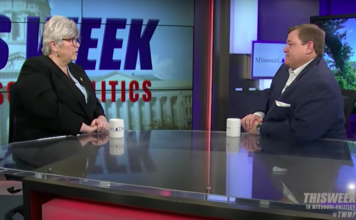 TWMP panel delves into investigation into the Governor

Sen. Gina Walsh sat down with Scott Faughn on This Week in Missouri Politics to talk moving the Right-to-Work referendum to August from November.

“No one has given me a reason, whether they should move it or not,” Walsh said. “I am perfectly happy with it in November but I am very confident that working men and women will come out and vote in both elections and that will be successful in defeating Prop A.”

She went on to say that she thinks that the number of signatures they gathered in a short time frame proved their ability to get people out to vote. Nearly double the number of people needed signed the petition to get right-to-work on the ballot.

“We believe that they want to put it in August because they think that they’ll be less voters,” White said.  “And, quite frankly, I think that it’s a little insulting because, you know, maybe they think the Missouri voter isn’t educated, which we do.”

“The governor is under attack because he has governed from the right,” said Baker. “And Kim Gardner’s case against him, there is zero evidence and her case is collapsing and I think you are finding that there are forces out there that are trying to attack the governor from these different angles just because of some of the policy decisions he has made.”

The three investigations include a House committee looking into the allegations against Greitens, the Attorney General’s Office looking into campaign ties with The Mission Continues, and a criminal case in the St. Louis Circuit Court.

3,273 thoughts on “Walsh happy with November date for right-to-work vote”