Biden speaks about the nation at rally for McCaskill 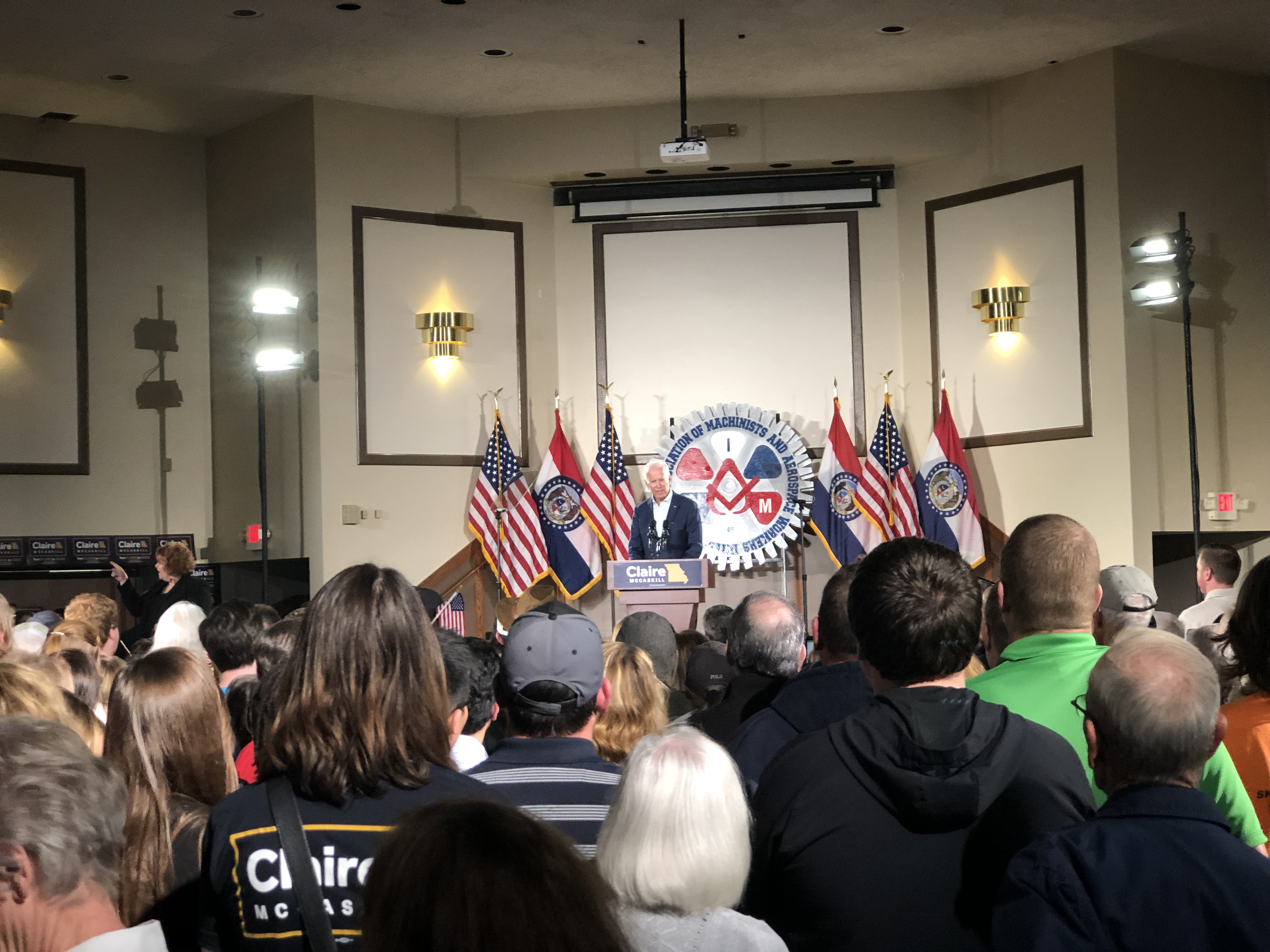 Biden’s stop in Missouri marked the first national Democrat to rally in the state with McCaskill.

Despite it being Halloween, there were a lot of Missouri voters in attendance spreading across generations, wanting to get out the vote.

Missouri 2nd Congressional District candidate, Cort VanOstran and Wesley Bell, who is the only candidate on the ballot for St. Louis County Prosecuting Attorney, were also in attendance and spoke on behalf of McCaskill.

“The last year and a half, I have been traveling around our district doing what our Congresswoman hasn’t done in six years, I’ve been listening to the people in this district,” VanOstran said. “Every single day, I am motivated by your stories that I hear while I am out on the trail. In every single one of your stories…there’s a common theme. People are sick and tired of divisive and hateful politics. They are ready for a return to decency and stability.”

VanOstran said that if Missourians want to return decency and stability to Washington D.C. then they have to send hardworking people, like McCaskill, there.

VanOstran said that it is not enough to play defense and keep the seats that the Democrats already have, but that they need to play offense and flip some more seats and flip the 2nd congressional district.

“There are three things that they are forgetting,” Bell said. “No one outworks Claire McCaskill. She got to work with legislation protecting our veterans, she led investigations into sex-trafficking, she passed legislation protecting health care for millions of Americans with pre-existing conditions. Claire McCaskill gets things done. Secondly, Claire listens. She’s hosted over 50 town hall meetings around Missouri to make sure that she understands the concerns of regular Missourians, like us, and then she takes those ideas back to D.C. so she can continue to fight for us. And that’s the kind of leadership that we need. And then last, Claire’s authentic. We may not always agree, but what I respect is that I always know where Claire stands. That’s because she’s honest, candid. She says what she thinks. Let’s be clear, that kind of authenticity is kind of in short supply in Washington D.C.”

VanOstran and Bell both touched on a sense of urgency for Tuesday’s elections. They both talked about the need to send McCaskill back, by showing up and showing out on Nov. 6th, to guarantee that Missourians will have someone fighting for them, representing them and taking their ideas back to D.C.

McCaskill said that in Jan. 2017 all of the “big wigs” in D.C. and the Republican party thought that Missouri was bright red. She said that the first thing on their agenda was to go through the legislature and pass a law that would chase wages down and take away an “all-American ideal that is the ability of workers to come together collectively for better wages, better benefits and safer working conditions.” But the working people of Missouri, all over the state, and even half of the Republican voters said no to Prop A. She said that their second agenda was to beat her, but “an hour ago, a Fox News poll said that we’re tied.”

Biden touched on the forces of hate that have terrorized Americans three times this past week for their political beliefs, the color of their skin, or the religion that they practice. He said that it needs to be recognized that words matter.

“The reason that I am so supportive of Claire, whether she’s running or not,” Biden said. “When we work together in the Senate, she, like me, understands that our political opponents are not our enemies, the press is not the enemy of the people. Before we are Democrats, Republicans or Independents, we are Americans.”

Biden said that the nation is much better than what it currently is. He said that it can feel like there are days where anger and hatred can be overwhelming, but that it is up to the nation’s leaders to change the tone and restore dignity into the nation’s national dialogue.

Biden said that the nation needs more men and women with character in public office. He said that the character of the country is on the ballot this year and that the words of the nation’s leaders matter in order to change the political climate for the sake of the state, the children and the nation.

“This is life and death,” Biden said. “That’s why we have to win back the House and the Senate. That’s why we need Cort and Claire.”

“We’ve got some work to do in the next five days,” McCaskill said. “We’ve got some doors to knock, we’ve got some phone calls to make. We’ve gotta get outside our comfort zone, talk to people we’ve never talked to before, ask them if they have a pre-existing condition, ask them about their health care, their Medicare, their social security. Tell them all those things are on the ballot. It is Josh Hawley on one side and Claire McCaskill on the other. And you know which side I’m on, I’m on their side.”