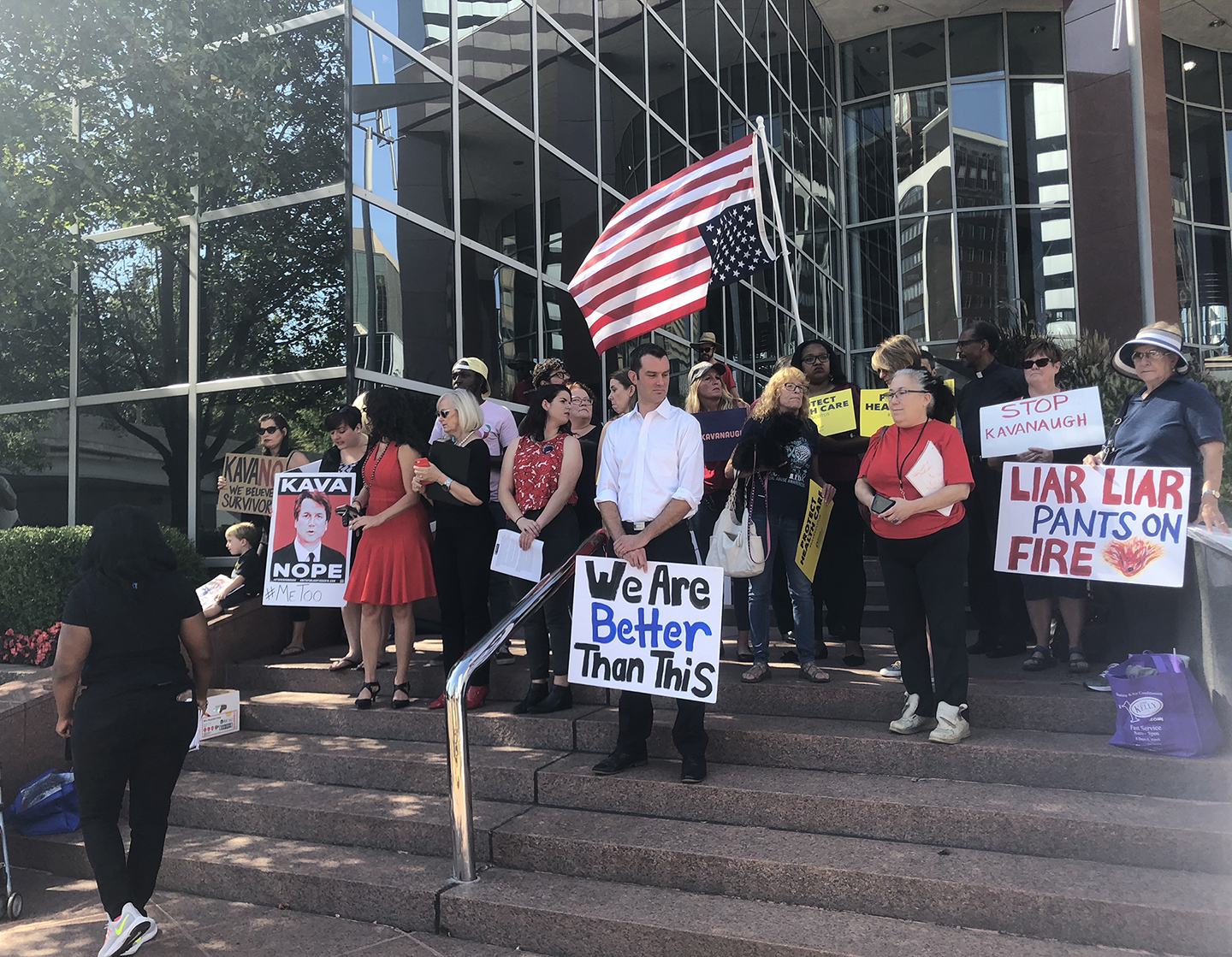 CLAYTON – Community leaders from around the St. Louis region gathered on Tuesday outside of Senator Roy Blunt’s office in Clayton to oppose Judge Brett Kavanaugh’s nomination to the U.S. Supreme Court.

Serving in the U.S. Senate as a Republican, Blunt is the only Missouri senator who has stated that he will vote ‘yes’ on Kavanaugh. Community leaders joined together to urge Blunt “to believe survivors and change his vote to ‘no’”.

During the event, seven community leaders came forward to explain why it is important for Kavanaugh to be stopped and the effects that his confirmation would have on society. 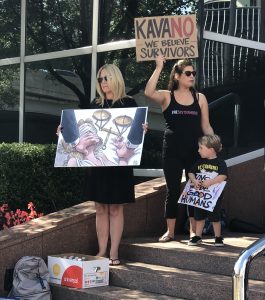 “The Missouri Republican Party has been complicit either by being silent or by continuing to push for confirmation of Judge Brett Kavanaugh,” Newman said. “We feel, as you can see from the people behind me, this is the opposite of justice. We ask Sen. Blunt, we’re standing here by his office, please vote no.”

“Since I have been elected to office, I have often spoken very publicly and openly about my own experiences as a survivor of sexual assault,” Green said. “I am one of those 1 in 6 women in this country who have been a victim of sexual assault. We need to recognize that even though I am 1 in 6, when we look at women of color, when we look at trans folks, those numbers are much higher,”

Green shared her experience of being molested at the age of three. She told her parents, who told her grandma, who took her to the police station but they didn’t believe her. Green explained that they asked her questions as a three-year-old about how many times the incident happened and where it happened at. “I was three. I couldn’t count. I didn’t know directions,” Green said.

“We are taught as women at a very young age that we won’t be believed when we tell our stories,” Green said. “Even if we do tell, nothing in our circumstance is going to change. [Kavanaugh’s] nomination and confirmation tells us that our stories don’t matter. It sends a signal to victims of violence all across this country that even if we report, nothing is going to change.” 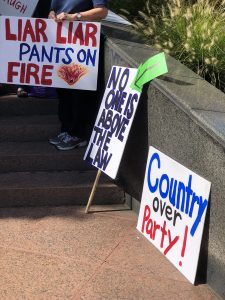 “[Kavanaugh] does not have the temperament nor the composure to sit with the Supreme Court of the United States of America,” Osmack said. “He said, ‘What happens in Georgetown Prep, stays in Georgetown Prep’ until now. Now, the truth is starting to come out. There is no such thing as ‘rape clothes,’ ‘she deserved it,’ or ‘she was drinking’. Do you know what happens when someone plans on drinking? It should just be a hangover, not a sexual assault, not a physical assault. What we are calling on Sen. Roy Blunt to do is to not see this as a Democratic issue, a Republican issue, but an issue of equality, of justice, of what is right. What is right is that Judge Kavanaugh will never take a seat on the Supreme Court of the United States.”

“People like Sen. Blunt will still vote to confirm [Dr. Ford’s] abuser. Let me be completely clear,” Klinghammer said. “Brett Kavanaugh does not belong on Supreme Court. Brett Kavanaugh does not even belong in his current position on the Federal Court of Appeals. Even before Dr. Ford and the other women came out and bravely shared their stories, America did not want Brett Kavanaugh to be on Supreme Court. He was the most conservative nominee in the history of Supreme Court nominations and he was one of the least popular even before all of these allegations came out.”

Speakers stood together as a group to say that they believe survivors and to bring attention to the rights that would be endangered should Kavanaugh be confirmed, including voting rights, LGBTQ rights, union rights and reproductive freedom.