Defense gets their wish on cross-examination, sort of 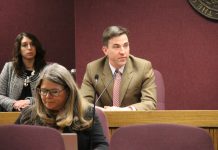 JEFFERSON CITY, Mo. — Under the rules adopted by the House committee investigating Gov. Eric Greitens, his defense will not get the opportunity to cross-examine witnesses in a public setting. That doesn’t mean cross-examination won’t be in the official records.

The Special Investigative Committee on Oversight is currently workings its way through reading more than 700 pages of testimony by KS, or Witness 1 in the House report — the unnamed woman who had an affair with Greitens in 2015.

Part of the testimony that is being read aloud by the committee is several different transcripts of KS being cross-examined by Greitens’ defense team. The defense interviewed the key witness on three different occasions, the first of which lasted roughly nine and a half hours.

St. Louis Circuit Attorney’s Office turned over the two transcripts of the cross-examination that they had in their possession following a subpoena by the committee. The CAO does not have a couple of one of the transcripts.

Chairman Jay Barnes asked Ed Dowd, one of Greitens’ attorneys, if they would be turning over a couple of the missing transcript in line with the subpoena issues. Dowd said he would check with the judge, contending that the CAO may have violated a court order in turning over the transcripts.

The committee is taking turns reading aloud the transcript of Greitens’ defense cross-examining KS. The first interview — which the committee is still working on reading into the record — includes the defense asking specific, detailed questions that probe every single aspect of her account of events.

The defense dove into any acting history, her attraction to Greitens, if she read Fifty Shades of Grey, her other clients, potentially lying to her mother, finding other men attractive, her relationship with her then-husband, and much more over nine hours.

When the attorneys for the Office of the Governor argued for “hallmarks of due process” to apply to the committee hearing, they argued that cross-examination hadn’t happened within the committee and to move forward it is needed to get to the truth. They argued that there is no precedent for this process in Missouri and based on proceedings in other states cross-examination is allowed.

“[Ed Greim], you said there’s no precedent for it,” Barnes said. “There is a precedent for it and not allowing counsel for Moriarty to cross-examine witnesses is what the precedent is in Missouri.”

But Greim argued the in the 1994 impeachment of Judi Moriarity the committee had transcripts of the witnesses being cross-examined, something the committee won’t have this time around since the allegations against Greitens’ has not gone to trial.

Yet, as the committee reads through hundreds of pages of the defense interview of the witness whose account Greiten disputes, more than 10 hours of cross-examination are being officially added to the record.

Greitens claims that the affair was completely consensual and has not answered if a photo was ever taken. Greitens has not testified under oath and it is unclear if he will appear before the committee.

KS has testified a multitude of times under oath, her account is staying consistent.

3,508 thoughts on “Defense gets their wish on cross-examination, sort of”